In 1988 the BBC released the first six short Talking Heads monologue plays written by Alan Bennett. After their first outing on BBC1 they were adapted for radio and in 1991 were broadcast on BBC Radio 4. The second series was released for BBC2 in 1998 so thirty-two years on we will see if they stand the test of time.

Sarah Lancashire takes on this disturbing tale which was not part of the original set of plays. Gwen has a daughter Maureen and her 15-year-old son Michael. From the beginning this play is a difficult watch as it focuses on a mother who is obsessed with her son, but not in the molly coddling way mothers can annoy their kids with; she admits that she fancies him! Shocker within the first few minutes sets the tone for the rest of the monologue. She likes to look at her son’s private parts, she smells his clothes, but not for hygiene reasons as I would to check my son’s clothes for washing, she just wants to feel close to him. 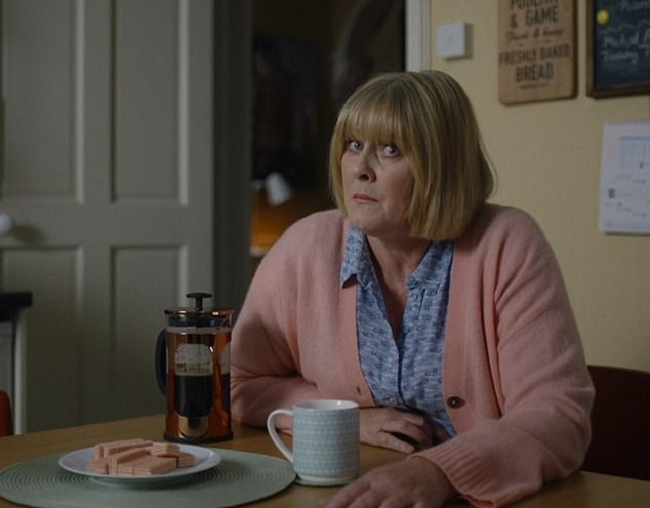 Lancashire portrays Gwen as lacking self-esteem; she delivers her lines in almost a monotone as she communicates her feelings of hopelessness. Gwen cannot control these feelings and she must tell Michael who is horrified. After discussing her problems with a vicar, she is still not able to put these thoughts out of her head and finally snaps.

Directed by Nicholas Hytner, this is Alan Bennett showing us his dark side. There is barely anything to feel good about in this play and Lancashire plays her part well, giving us an insight into her tormented mind. There is a feeling that this is one of those subjects that is not discussed. How could a woman take the protective coating off her relationship with her son? How could she see her boy as a man who is fair game for her affections?

The outrageous nature of this play makes the viewer recoil, but our inquisitive nature piques our interest.

All twelve plays are available to watch now on BBC iPlayer. These are too good to miss and remind us just how versatile Alan Bennett is as a writer. https://www.bbc.co.uk/iplayer/episodes/p08ftkkx/alan-bennetts-talking-heads