Now in 2020 and filmed during the lockdown adhering to all social distancing measures, the original ten plus two new pieces written by Bennett himself last year have been remade with a new generation of respected actors. Some are better known that others, but all have the experience to make each monologue their own rather than a rehash of the original.

Talking Head 5 is Playing Sandwiches. Originally filmed with David Haig in 1998, now it features the wonderful Lucian Msamati as park worker Wilfred Paterson. Msamati has a magnetic and commanding presence even on the small screen, with a voice that could charm birds from trees. 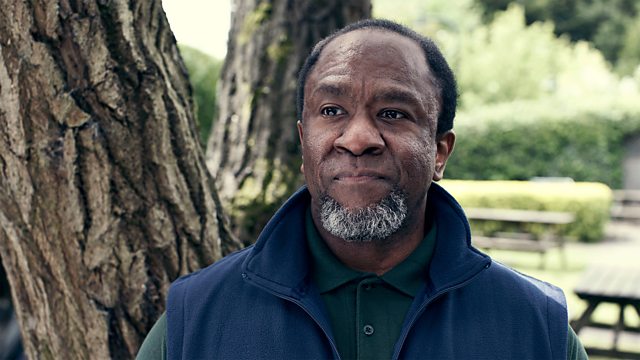 Wilfred has been working in the Park's Department for six months, but there is a problem in getting his previous employment history. Wilfred enjoys working outdoors and after a conversation one day with a mother and young daughter, sees them regularly sitting in the bandstand, the little girl taking a shine to the large gentle man. However, Wilfred and his wife don't have such a good relationship with their family and the reason why becomes clearer as the play progresses. The script then takes a darker turn as Wilfred's history comes to light and why he is shunned by his family.

Lucian Msamati is stunning as Wilfred. Initially coming over as the genial man next door type, buying sweets in his local shop, cleaning up all the mess left by the public in the park and overall a nice guy, he slowly becomes more oppressive, more dangerous while managing to never appear threatening, a truly wonderful piece of acting. Shot using various already available sets, the snippets of Wilfred's life are shown brilliantly. Director Jeremy Herrin pulling together everything to make a half hour flow amazingly fast.

The fact that each Talking Head can be made with only one actor and a small crew makes these the ideal lockdown/social distancing project for the BBC to have undertaken. Thirty-two years are the first ones and twenty-two years after the second ones it's great to see these stunning pieces back and to hopefully find more fans in those too young to remember the originals.