The newest project brought to us by Lovehistory Theatre Company and St George’s Hall invites us into the world of the criminal gangs of Victorian Liverpool. The mood was effectively set in the darkness of the hall, which already encompasses an eerie and profound presence without the added bonus of the actors encouraging the fear that already exists in a dark, cold ancient building at night time. It is noticeable that the beginning of the tour, which runs for approximately an hour, is stronger than the end. It sets up what seems to be a story with continuity and engagement, and the guide, named Niall Ross Hogan, was initially successful in keeping interest within the group peaked and excited for what the tour had to offer.

Unfortunately, this failed to be sustained throughout.  As aforementioned, the guide was attentive to the group, ensuring everybody could see and hear the performances that were taking place and sensitively reassuring those evidently nervous that if at any point they were feeling ‘sick or dizzy’ to let him or a lady who was following behind know, and they would be able to attend to their needs. Michael Hawkins, who plays the adult Charles Vaughan, was the only performance that really stood out or evoked any genuine sympathy and pity for the reality of those underclasses in Victorian Liverpool. He provided a dramatic, brave performance which was really engaging and left a lot in the group open mouthed and moved by the heartfelt monologue he provided of a young boy who had lost his way. Except for this, I found many of the other performances to be forgettable and hard to follow. It was difficult to keep interest peaked due to the disjointed feel of the stories and lack of continuity between characters and situations, for example moving from Bob Pendleton’s revenge to the life of the criminal woman. 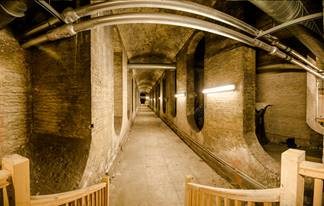 Neither stories were connected or blended together effectively which left the production appearing to be a little bit scattered. The end of the tour also anticlimactic. There was no effective conclusion to the stories and characters that we had encountered previously and the finality of the performance felt abrupt and premature.

The production missed an opportunity and failed to take advantage of the eerie qualities already existent in the magnificent building and in no instance were my nerves tested. Those expecting a scare or unsettling feeling I’m afraid will be disappointed with this production. However, the violent fight scenes did provide some excitement and caused one lady to step away from the action taking place, so those easily scared would have gained something from that at least. Despite this, it was very informative and accurate in depicting the reality of the underclasses and criminals of Victorian society, especially depicting the inevitable criminal lives they were resorted to and the life of the fallen woman, which was sensitively yet effectively portrayed. However, it is missing a certain spark to make the production as special as it promises to be when hearing about it. There is much quality and promise in the Catacomb’s tour, but more continuity in the narrative of the Victorian gangs is needed and the repetitive nature of the story telling needs to be mixed up and kept fresh to sustain the attention of the group for an hour.Priced at £15 per ticket, there is a lot of information and enjoyment to be gained from the tour, however expectations for an exhilarating, unsettling dark tale of the lives of the Victorian gangs will not be met.

The tour begins on Saturday 27th of February and continues until Thursday 3rd March and tickets can be booked via http://bit.ly/1Q8EhgM