After its premiere at The National Theatre late last year Husbands and Sons has made its way up North to the Royal Exchange Theatre in Manchester. Combining three of D.H. Lawrence’s plays Ben Power has adapted them into a wonderful cross section of life. The set, brilliantly designed by Bunny Christie, holds three individual houses, each displaying the heart of the home, the kitchen. Each house corresponds to one of D.H. Lawrence’s plays. The Holroyds telling The Widowing of Mrs Holroyd, The Lamberts displaying A Collier’s Friday Night and The Gascoignes presenting The Daughter-in-Law; each story individually fascinating and linked seamlessly to the others.

Director Marianne Elliott states in the programme that period dramas can become ‘a bit of a museum piece’. However, she had need not worry about Husbands and Sons falling into this category as it was one of the most visceral pieces of theatre I have ever seen. A circular lighting rig rose up at the beginning of the play to let us into the community and came down again at the end, shutting us out and trapping the people of the Brinsley Colliery inside once more. Setting this play in the round was genius, creating a tense, claustrophobic atmosphere; so close you could almost taste the dirt and sweat. 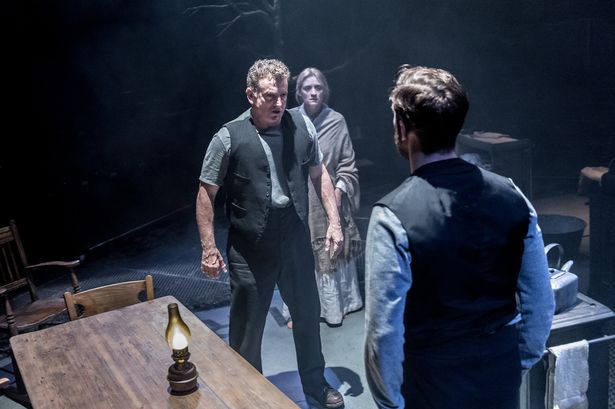 Husbands and Sons is created from the women’s view point, with each woman of the household at the foreground of each story. Each home could be the future of the next, with the ongoing circle of pit, life and death clearly seen between the houses. Louise Brealey plays Minnie Gascoigne, a jittery, petite, bird like woman, who was ready to blow at any given moment. Wonderfully explosive and compulsive, all Minnie needed was for her husband to cut the apron strings and give himself purely to her. This culminated in a tense scene between Minnie and her mother-in-law, played by Susan Brown, in which they fight over Luther Gascoigne -the husband and son - who stands idly by as a child would witnessing an argument. Joe Armstrong, as Luther, plays the muddled man – child extremely well. His worry about getting a local girl pregnant and his own wish to be loved was pitiful yet understandable.

Julia Ford as Lydia Lambert has her own battle to fight as her son is growing up and seemingly leaving her motherly love for a new found type of love with a girl more on his intellectual level. A strong yet vulnerable carrier of the house, Ford was tormented by her children, yet, created an isolation and void of meaning when they weren’t there. The Lambert’s household was wonderfully headed by Lloyd Hitchinson as Walter. A cursing, dirty, lump of a man who, when came to wash couldn’t stand the cold water his wife Lydia took pleasure in soaking him in; a slight piece of comedy in the grit of the Brinsley pit.

The woman of the night however, has to go to Anne-Marie Duff as Lizzie Holroyd. Caught between drunken husband Charles, possible lover Blackmore and her son Jack, she is tormented by her love and hate for men. Pushed and pulled between the three men and her loyalty to them, her inner turmoil hit all corners of the theatre. Charles Holroyd, played by Martin Marquez is drunk for the entirety of his time on stage and is fantastic for it. A brute, he plays both the comedy and tragedy of an alcoholic husband. Lizzie’s outpouring near the end of the play to her husband was utterly heart – wrenching, a feeling of lost time and regrets, opportunities never to be reached again.

The whole ensemble – with credit to dialect coach Penny Dyer – had perfect accents throughout which was wonderful to hear. So many period dramas on television at the moment, although incredible, tend to focus mainly on the wealthy upper class, where as D.H. Lawrence wrote in such a specific dialogue it is wonderful to see that respected and for the working class to be represented in a visceral and enriching way.

Beautiful direction comes in the form of Marianne Elliott, mirroring scenes from one house and another, linking their similar yet completely unique lives. Mrs Holroyd and Blackmore finally embracing as lovers and Mrs Lambert and her almost grown up son echoing the embrace; her clinging on to his childhood, him moving on. The play was mostly set in realism with a few elements of surrealism creeping in. The houses were created with lots of belongings, such as tea cups, bowls and cutlery, yet doors, coats and food were mimed which jarred slightly with the realistic world. The miming was done so well, however, the actors’ performance of it cannot be faulted, but its place in this world can be questioned.

The choral singing from the women and the joined prayers were beautiful, as it gave the women a solidary that the men had in their walk to work, uniform and dirty faces without them coming into contact with each other. However, one section in which all three wives lay themselves on the table and then stood on top of them to watch the men walk to work, although visually stunning, jarred and lifted me too much out of the dirty, grime I was happy to wallow in. Coming in at around three hours, including an interval of twenty minutes, Husbands and Sons can seem a little long. However, the performances pull you so far into their world you almost don’t want to come back out. This stunning, visceral production is on till 19th March and is well worth the viewing time.