If I am honest I really didn't know what to expect with The Ale House but I wasn't sure it would be my cup of tea. How wrong I was.

It opened with the clever use of film and the song Neighborhood by Space which seemed to accurately describe all of the main characters in the play. From here we went straight into the pub, The Ale House, where landlady Lucy, played by Lindzi Germain breaks the forth wall with the opening monologue. Usually I am not a fan of this however Germain managed to make it feel like the audience were just regulars in the pub that she was talking to. It was incredibly effective and set the scene for the rest of the piece.

Over the course of the first act we see a string of “regulars” to the pub from Yogi, the liar with a cocaine habit played by Philip Olivier, Joe (Nick Birkinshaw) who spent more time drinking pints of mild than helping Lucy behind the bar to James McMartins Robbo, an alcoholic with a massive memory hole and dodge bowels!

Most notable of these regulars however was Trevor, a war veteran with Tourette’s. Jake Abraham brought this character, who had very few lines, to life brilliantly giving a mesmerising performance. I couldn't keep my eyes off his antics from trying to drink his lemonade without the ticks causing a spillage to playing with his soldiers and tanks. What Abraham did though was make Trevor completely lovable rather than the butt of the jokes. 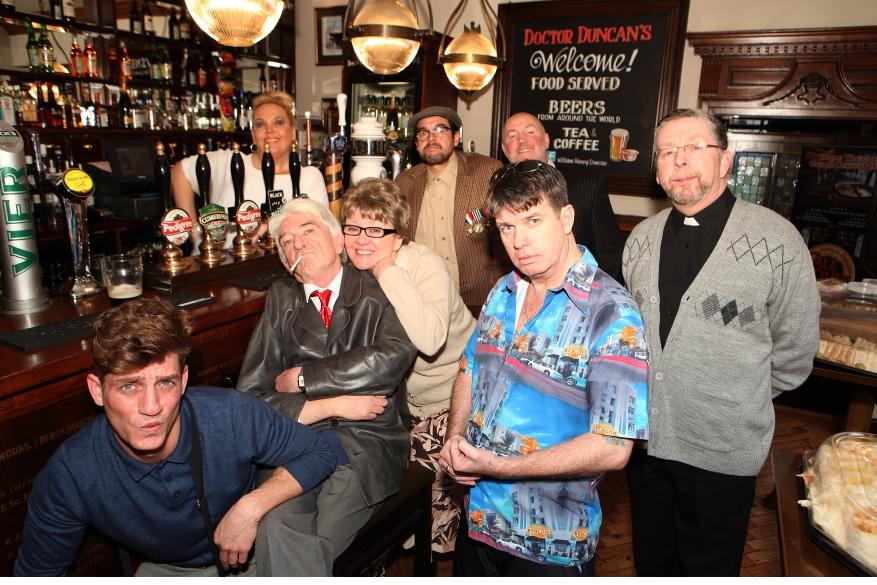 The second act is more of the same, as the night progresses in the pub. The characters get a little drunker and the musical entertainments begins with songs from Les, (Kivan Dene) and Germain, accompanied by Abraham as well as an unexpected turn from Father Flaherty (Les Doherty).

There was no real story as such other than a day in the life of a pub. The play was held together by Germains character, perfect timing and a wickedly funny script. As well as Abrahams Trevor, Germain was the other stand out performance. Her one liners were delivered with aplomb and by the end the whole audience were rooting for Lucy to get her happy ending.

The Ale House was a laugh a minute side-splitting piece. Slap-stick and flamboyant, it’s not Shakespeare but doesn't pretend to be. What it is, is a comic relief after a hard day, a perfect night out with friends and a pub I’d love to visit myself. For a sceptic at the start, The Ale House has fully converted me. I’ll have a glass of wine and whatever you're having….

Away from The Ale House, this was the first performance I've seen at The Dome at Grand Central and I was very impressed by this new theatre space in Liverpool. It looked great, full of character and atmosphere and the acoustics were excellent. Like The Ale House, the theatre was a pleasant surprise and like the play, I hope I get the chance to see it again soon.