May Contain Food - The Lowry, Salford

Protein Dance’s “May Contain Food”, performed in the absolutely breath-taking Compass Room in the Lowry Theatre, with huge windows overlooking the span of Media City, was not exactly what I expected.

It was professional, well-rehearsed, and visually interesting. The performers were all incredibly talented - both vocally and in general performance - and some of the physical theatre displayed by the dancers of the troupe: Sonya Cullingford, Carl Harrison, Saara Hume and Matthew Winston: was genuinely beautiful.

The very interesting in-the-round space, with the audience sat around circular tables decorated with fur, feathers, cereals, vegetables, and food packaging, was well thought out and afforded a great view to watch the dynamic movements of the performers. Additionally, the tasting menu which accompanied the performance, served to the audience at specific points, was a thoughtful touch which created an involvement in the piece yet allowed the audience to remain a safe distance from being truly immersed in the action. 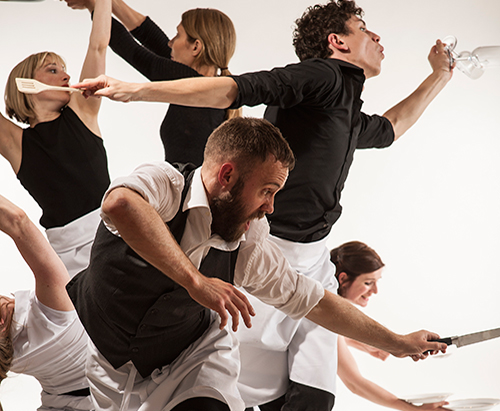 However, I couldn’t help but feel, as I watched talented individuals sing and dance wonderfully, that there was something missing. May Contain Food is perhaps an appropriate title, as while the production certainly contained food, as both props and subject matter, it didn’t actually do very much with it.

Our nation’s, and indeed our world’s, relationship with food is a complicated and tense one. We collectively deal with obesity epidemics, famines, eating disorders, fad diets, intolerances, allergies, anxieties, misleading marketing, and the brutalities of factory farming and poor animal welfare on a very regular basis. Food is a huge topic, and no dance company could appropriately deal with its many facets in one 90-minute slot. That being said, I do feel that Protein Dance’s effort was a little bit of everything and nothing. Occasional profound moments, such as the feeding of an elderly man, repetition of ‘health food’ marketing claims, or an impassioned speech pleading with us to treat animals with respect, were quickly spun into ensembles of singing a food recipe or writhing around a table before they could get too interesting. I believe that the performance would have benefited from deciding on one or two angles which would have allowed a greater depth of interrogation, as opposed to the jumble of ideas held together loosely by vocal harmonising and tenuous links to food.

Now, theatre does not necessarily need some overarching message or moral, in fact that would very easily become grating, but some sense of purpose would really have helped to elevate this production. Simply put, May Contain Food became an instance of style over substance, and although the style was a beautiful thing to watch and experience, it did leave me hungry for something more.