Humour and poignancy intersect in Aizzah Fatima’s warm and engaging one-woman show, which interweaves the stories of six Pakistani-American women in post 9-11 America.

A one-act play of 65 minutes, Dirty Pakistani Lingerie lays out the stories of its characters like colourful washing on a line, encouraging the audience to pick up and inspect each individual piece and try them on for size.

Over the course of the play, we are offered little snapshots into the private lives of its protagonists: from a feisty six-year-old wrestling her little sister for control of her Dora the Explorer doll, to a Hijab-wearing, lingerie-buying young feminist on the threshold of both marriage and university (which, she comes to realise, could turn out to be an either/or prospect), to a 60-something mother tirelessly trawling her way through the pages of the Urdu Times Matrimonial section in a bid to find a husband for her “32 to 34” year old daughter.

Fatima’s comic timing is impeccable throughout, drawing knowing laughs from her audience with her on-point characterisations, each clearly drawn and well-executed. She is also skilful at handling swift changes in tone, effortlessly changing gears from bolshie and unapologetic to hesitant and confessional. 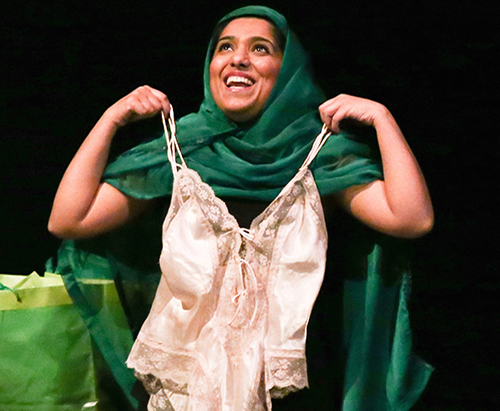 Equally effortless are the transitions from scene to scene, proving as smooth and as fluid as the upward sweep of Fatima’s grass-green dupatta (scarf), one of the play’s deftest props and symbols, worn in six different ways to best suit and represent each character.

The staging and lighting, too, are wonderful in their simplicity, transforming an almost bare stage into several different locations, such as a bedroom, a busy restaurant or an airport lounge, using spotlights, music and ambient noise.

Though the play, in parts, touches on broader socio-political issues faced by Pakistani Muslim women (and men) in present-day America, such as racial discrimination and false imprisonment, the major focus is on the personal – the choices that we make, in love and in life, and the pressures that we face, such as the delicate balance between our closely-guarded innermost desires and the weight of our family’s or society’s expectations.

The intimate setting of The Studio works very well here – the play is not so much a series of monologues but rather many duologues, where you, the audience, become the other unheard conversant, be it the mother, daughter or best friend. One feels as though that sense of collusion, of overhearing or silently participating in a private conversation, would be lost in a bigger theatre.

For me, one of the biggest themes of the play was what director Erica Gould eloquently referred to in the post-show Q&A session as “the hyphenated identity”, and all the struggles that come with inhabiting more than one space, be it two cultures, ideals, roles or places.

As a British-born Bangladeshi woman who self-identifies as a feminist Lapsatarian (my own word: I am basically the worst wine-guzzling, bacon-snaffling “Muslim” you’ll ever meet), there was much I recognised and that resonated with me. But although the play centres specifically on the stories of Pakistani-American Muslim women, I would argue that its very recognisable, human themes transcend nationality, religion and gender.

This is no better reflected than in the play’s framing device, a poem by the 18th century Indian poet Mirza Ghalib, which floats the idea of a “thousand dreams that you would die for”; but living the dream, whether that is finding love, happiness or success, is presented as a complex affair, where you are continually forced to consider what you take with you and what you leave behind.