Who's Afraid of The Working Class - Unity Theatre, Liverpool

Who's Afraid of The Working Class, a play written by Luke Barnes and Directed by Will Hammond is the latest piece of theatre to grace the stage of Liverpool's Unity Theatre, performed by LIPA's third year students. Its themes throughout portray the social class and post war in the 1940s, and the view points of the affected people in each class structure - The working and the ruling class.

From the title of the piece, you automatically know it will target the political issues in which people still face in the day to day life we lead now, including such themes as race, sexuality, drugs and poverty.

Upon entering the black box theatre the actors were spread across the stage preparing themselves for the performance, getting dressed into costume and perfecting the makeup which consisted of grey paint and paint covered clothing. For me this instantly struck the feel of lower status as I noticed that the clothing was of old fashion, mostly denim and thick jumpers covered in paint to show that it had been worn out and wasn't worth a lot. I was extremely intrigued by how the actors where warming up whilst the audience entered the theatre, it really set the atmosphere for me and it was thought provoking because it made me wonder what was going to happen next.

As the piece began, and throughout, it had a lot of physical theatre and movement pieces which were consistently strong and helped the scenes to flow from one to the next, especially when the sets where changing from living rooms to pubs to a boat on a river. What I particularly loved about the boat on the river scene was that the actors swayed the lockers as if they were waves in the sea whilst being sat in the make shift boat. It really triggered a sense of realism as though it's not enough just to vision it but you feel it aswell. It's not often that I see something within a piece of theatre and really feel like I'm experiencing the emotion or setting and understand whats going on straight away, but in this piece I did which told me I was experiencing something amazing. 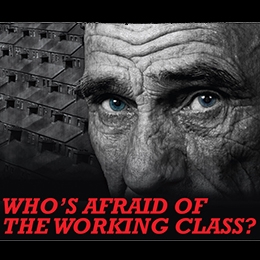 A standout performance by all involved but particularly Connor Lee Dye as John and Chris Mohan as the Dad and later on becoming the son of John - Mick. I love to see multirole within theatre, especially when you can distinguish the difference between the two characters that one person is portraying and I think Mohan did this beautifully.

Another cast member who made me leave with a good impression was Sophie Cottle playing Suzie. Not just within her characterisation, but when being part of ensemble movements and particularly the opening of the show when her focus was outstanding. I found myself completely in awe of how she gripped the audience and her stance was just so grounded and still when it was intended and not once did she drop her character.

As described in the programme, it's very Berkoff inspired which is something that you immediately pick up on within the language and the grotesque characterisations. It's worth mentioning that this piece was completely off script, blocked and ready within just four weeks, which really does speak volumes for the end result and the hard work that everyone had put in to make it what it was.

A memorable quote from the piece "If you have your health, everyday is a holiday" I feel is a brilliant summary of what the message wants to spread. Each character has their contrasting opinions on their status and what their dreams and wishes are and would be, and I would say this is what made the piece such an interesting and relatable topic because it doesn't just target the view of one, but targets the view of the many, making it something for everyone.

Running until Saturday the 5th of March, if you can make it I'd strongly recommend getting a ticket and experiencing it for yourself.