Tonight I watched ‘Lion Man’ at Hope Mill Theatre in Manchester. It is a new play written by Tom Roberts, and was an absolute pleasure to watch.

Firstly, the staging on the play was well thought out, as the stage was an oval shape with the audience on both sides, which helped the audience connect and feel the realness of the story. The play begins with Scott (Ali Wilson-Goldsmith) being interviewed at a police station, but what showed was Scott talking into a light with an over voice. Throughout the performance I found this over voice very helpful and interesting, as it would give clues and information to the story.

From here we are transitioned to Scott retelling the story of him and ‘the boys’ in Ozzie’s café where they often hang out. ‘The boys’ consist of Jamie (George John) who is having problems with Holly (Jade Jones), Stanley (Oliver Robert-Vale), who is the ‘big lad’ that protects Fergus (Stan Rawlings), and Fergus, being a “straight forward speaks his mind” character. All these characters were effortlessly performed in such a genuine way. They are told of a lion who is on the loose, but it is uncertain how they find out this information, as to whether it is from a newspaper or just from Ozzie telling them. This was really interesting as the scene was performed once with a newspaper and once without, showing the differences and whether Scott had all the right information when he was retelling the story to the police. 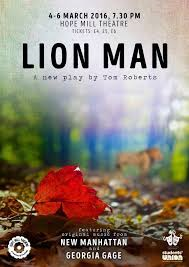 The next scene follows ‘the boys’ arriving on their camping trip, with Scott’s girlfriend Emma (Georgia Affonso). I found Emma witty and realistic and particularly liked how she was portrayed as a feminist. Because Emma is the only girl on this trip, she decides to invite her friends Holly and Beth (Grace Bridgewater). However, Holly is not on great terms with Jamie and he is worried about seeing her. The scene to follow this which I found incredibly intriguing is where we see Holly and Jamie’s relationship from their different points of view. From Jamie’s point of view, we are told that Holly tries to kiss Jamie but he resists so she slaps him. But in Holly’s view she suggests that all she did was playfully tap him on the cheek. I thought this was interesting and again showed the importance of different perspectives, and was also very lifelike as it portrayed a relationship where two people want different things.

The next scene which I found very amusing was a lot lighter than the other scenes, and this was obviously conducted by Fergus. It goes without saying that this character was acted perfectly when he turns the game of Articulate into ‘stripulate’ in which he stripped off five items of clothing to reveal gold speedos. This was very funny and made the audience see him as a character who doesn’t take anything seriously. This game however takes a turn for the worse when Jamie and Holly have an argument and Holly storms off with Emma. This is the last time we see Emma.

The second half of the play shows a growing relationship between Beth and Stanley. Beth’s character is very down to earth and she asks lots of questions, before they finally kiss on the camping chairs. I thought this was very sweet as it showed two very different characters being intimate.

I found the next scene incredibly powerful as Holly returns with her brother Ricky (Tom Jones), who Jamie is very scared of. Throughout the play from the voice over we have heard about Ricky and his tendencies, but this is the first time we see him. However, this scene was very surprising as it did not turn into a fight between Ricky and Jamie. Stanley stands in Ricky’s way staring him down, whilst Holly gives a very powerful speech about her feelings. At this point my opinion changed on Holly, as her speech showed that Jamie’s actions really had hurt her, and she didn’t want revenge but just to tell him how she felt. At this point Jamie leaves the camp with Ozzie (Alex Hurst), and I think this was really powerful as it showed that Jamie understood Holly’s feelings and that he was sorry.

From here, the camp site grows quieter as Beth and Stanley go to the car, leaving it just Fergus and Scott sharing the tent. After the events of the trip they realise they have not actually seen a lion, but Fergus’ hope and optimism for seeing one leads Scott to nick name him the lion man. Whilst Fergus is outside the tent relieving himself, Ricky comes back looking for Jamie. Fergus states that Jamie has gone, but he continues to be very cocky. With Scott coming out to help they find out Ricky has a knife, but this doesn’t stop Fergus from typically speaking his mind. This leads to anger and shouting, with Ricky charging into the tent after Fergus who he kills. He returns outside the tent with blood splattered hands. I thought this was an amazing way to show Fergus’ death as the audience doesn’t actually see the death, but from the action and build up outside the tent we can understand what has happened. This was such a quick twist of events as the death happened it really was surprising; I was close to tears.

This scene is followed by a short interview where Scott is presented with photographs of the camping trip, and we learn that it wasn’t Ricky who killed Fergus. This makes it very ambiguous as we still are never quite sure who killed him, but it is a very powerful and moving ending nonetheless.

All of the cast played their roles with such realism and commitment, it really did seem that it was group of friends on a camping trip. I cannot recommend Lion Man enough.