The touring production Of Mice and Men, is a Birmingham Repertory Theatre Production, presented by The Touring Consortium Theatre Company and was performed at the Wolverhampton Grand. As this is a well known and well loved story, expectations were high as the audience entered the theatre. We were met with Liz Ascroft's design; wooden floors creating a playing space in the middle of the stage with a crack running horizontally across the space, creating the area in which Lennie is to wait for George if anything 'bad' were to happen. The back drop was beautiful with a sunset projected onto a wall which changed colour throughout. Unconventionally, in a Truman Show like manner, the 'sky' had a door in the centre and the two main characters entered through it. Prior to that we were treated to a lovely rendition of This Land Is Your Land by the whole cast which took the audience straight into the world of the play.

(Spoiler alerts throughout!) The play was directed by Roxana Silbert in a Brechtian style displaying the wings of the theatre with live instruments and other members of the cast visible which worked well until Curley's wife's death. At the scene change - to be in keeping with displaying the workings of the theatre and not allowing the audience to get too involved in the action - she may have walked off stage, displaying her death in the play, yet showing the actress gets away unscathed. However, she was carried off by Slim, keeping the illusion of her death; the only time the action onstage didn't quite fit the style chosen. 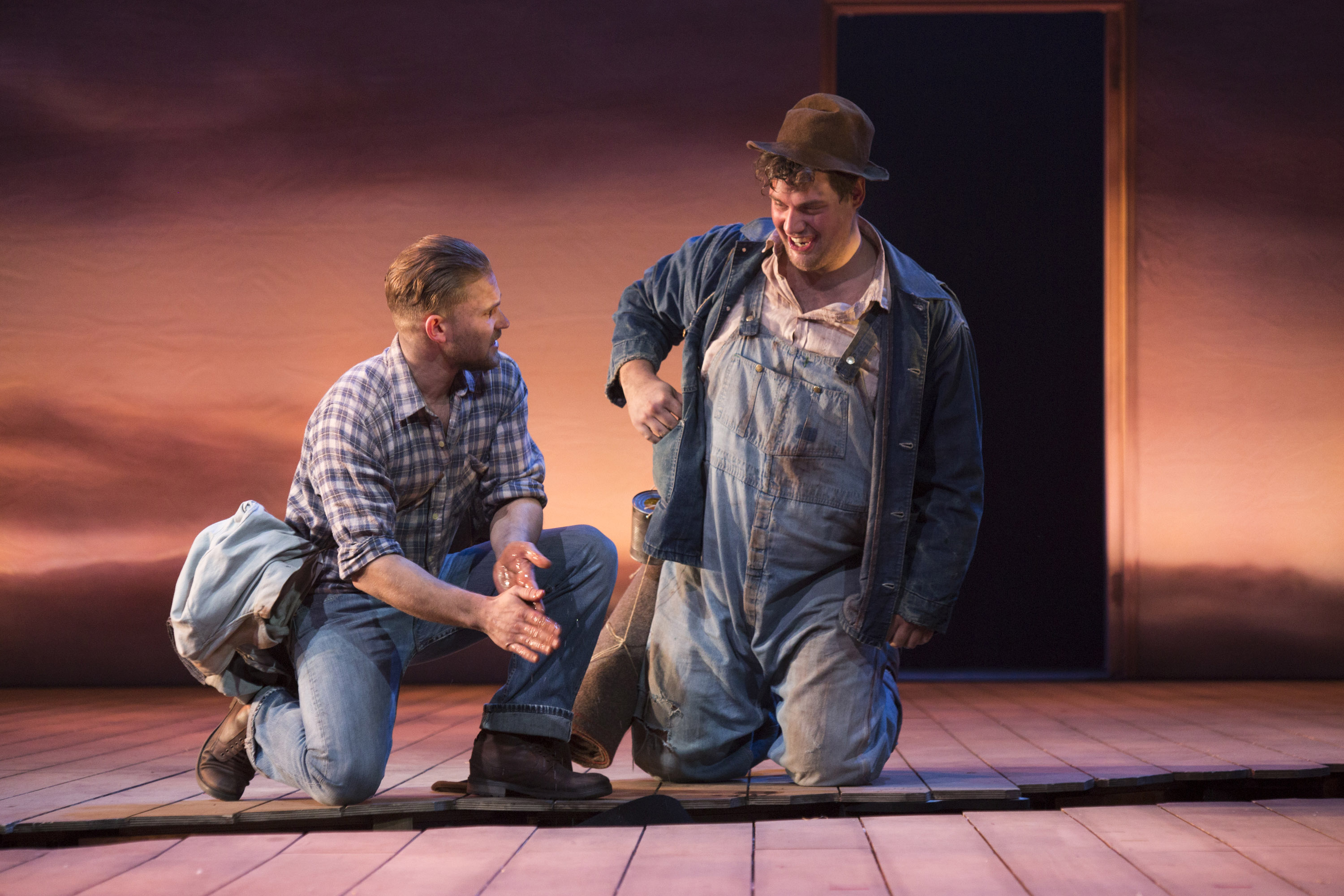 The music, created by Nick Powell, was used well to create a beat to which the set was changed by the actors, again helping set the scene at the ranch. A violin was used when the men begin to track down Lennie after the murder of Curley's Wife which really created a tense atmosphere for hunt. The lighting, designed by Simon Bond, created the space and feel of the locations, from light pouring through the slats in the barn to the more harsh light of the open American planes. The set itself felt able to transform from small space to open fields but always had a sense of depth and voyage to it, as if each space was a part of the journey on the long road to George and Lennie's own farm.

The two actors, William Rodell and Kristian Phillips portraying George and Lennie, created a fantastic onstage relationship. The sense of history between the two was palpable from the moment they stepped on stage. Phillips was particularly impressive in creating the loveable yet tragic character of George. Other notable performances came from Saoirse - Monica Jackson as Curley's Wife. She was able to portray the enticing woman on the ranch and yet allow her naivety and vulnerability to be revealed. The scene between George and Curley's Wife, just before her untimely death was very sweet, with both young souls talking about their dreams and how they might get themselves out of the mess they're in.

The build up to the neck break was brilliant as Lenie stokes Curley's Wife's hair with quickening hand movements becoming more and more rough with each stroke. However, as both actors were stood on a raised piece of set the struggle felt a bit safe, this was probably due to health and safety but lacked the panic and struggle needed to make the event feel real. The final scene in which George holds Lennie at gunpoint without him knowing felt slightly rushed and wasn't as heartbreaking as one might have hoped; with the lights going to blackout a while before the gunshot is heard. Tilly the dog must be mentioned as the whole audience melted as she walked onstage. Although she was a beautiful dog she didn't feel as feeble as she was meant to be. A very alert and happy dog she seemed the opposite of the blind, hardly able to walk, old dog the characters onstage described.

Overall, the set design was stunning and there were great performances from the main characters but also from Neil McKinven as Carlson and the Boss; he was so varied as the two characters it was only after reading the programme it was obvious it was the same actor. Jonah Russell also stood out as a reliable and sturdy Slim. The production is on tour and can be seen in Wolverhampton till 12th March before moving onto Darlington.