Fake It 'Til You Make It - Contact Theatre, Manchester

Personally, I've not had any first-hand experience of mental illness, all I know, is it’s good to talk about it, but it turns out, for this performance, all you had to do was listen. Bryony Kimmings and Tim Graybrun perform their own personal 'love story' as Bryony calls it to a sold out theatre. Their mundane, silly, perfect yet not so perfect relationship is beautiful and so is their story. One thing to take away from this documentary cum very personal tale is that depression not only affects the individual's mental health but also the mental health of those around them. Bryony and Tim relive parts of their relationship and the challenges they face as Tim combats his depression and tries to become tablet free.

We saw them dance with funny, co – ordinated moves and we were treated to songs, written by the performers themselves; with an almost Flight of the Concords type feel to them. By using their first names to introduce themselves and direct address, the audience always felt a part of the performance, being allowed into the performers’ fragile world. Throughout the first half of the show Tim can’t even look at us and his face is hidden behind elaborate array of head gear; a halo of clouds, an enclosed case of knotted rope and glasses which concealed us from his view. 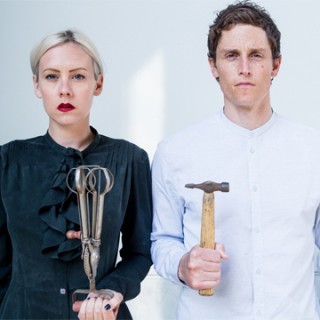 Trying to work out how crying and ‘being an man’ combine, Bryony, Tim and the audience go on an adventure of discovery together. When Tim seemed at one of his lowest points in the show he wore a paper bag over his head with a sad face drawn on it. The performers were accompanied by Close To You by The Carpenters as Bryony tried to pull Tim back into the previous routine when they were ‘happy’. Tim descends the downward spiral as he cannot respond to Bryony’s efforts and ends up ripping the top of the bag into tiny pieces, a very distressing but affective section of the play.

Although this is a play about depression and is aiming to educate and shine a light on mental illness, it never became fact heavy or condescending. With the running time of about an hour, voice recordings of their real life fight with depression were interspersed throughout the action, breaking the performance into small manageable ‘scenes’. The performance was hard hitting when it needed to be but the moments of comedy such as ‘symptoms dance’ made the topic easy to listen to. The ‘symptoms dance’ was a choreographed routine in which Bryony and Tim held up cards displaying symptoms and recreating them whilst moving to a Latin beat, both informative and fun to watch. Also I’ve never seen an ex – accounts manager with such rhythm!

The post show talk showed just how many people are affected by mental health issues and revealed how this show is giving individuals the chance to open up about their illness. This beautiful, funny and extremely educational piece of theatre is pitched just right by being enlightening without being patronising. Watching the couple onstage you can feel the love and care shared between them and seeing these two human beings join together in this way is so inspiring. Finally, congratulations to Tim who has been off his medication since September, this show really should be prescribed on the NHS!