Bringing his acclaimed one man show to HOME, McBurney masterly uses the large performance space as his electronic playground to tell this fascinating story. What makes The Encounter stand out is McBruney’s use of sound technology. The audience are required to wear headphones throughout the performance, which the performer uses to great effect to create the sounds of the Amazon. 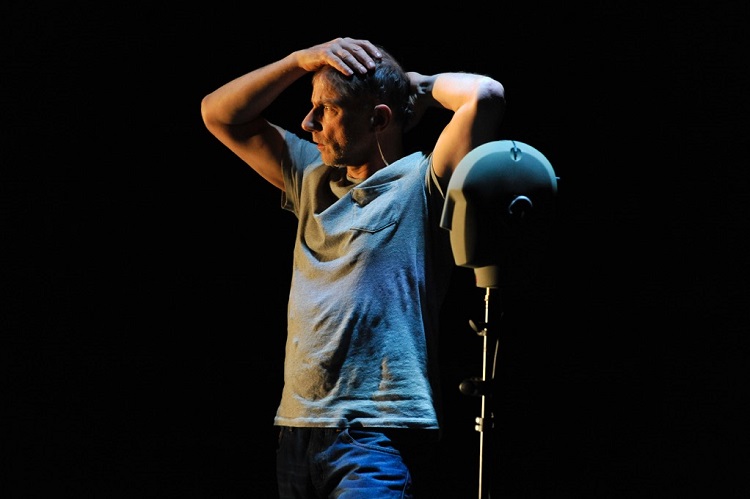 You can hear the heavy drops of rain, the cry of thunder, animalistic callings. This creates a personal connection and atmosphere; you can close your eyes and feel like you’re right there in the Amazon with the McIntyre character and the mysterious Mayoruna tribe. This is used to great effect when the character witness’s the tribe breaking into a tribal dance in which he uses video cassette tape to create the sound of the floor whilst re-creating the tribe’s movement, the evolving sound becoming larger and tribal chants echoing through my ears as Loren discusses how the tribe are enjoying this moment in time, unware of the growing western culture that will impact this primitive but natural culture.

Simon McBurney gives a phenomenal performance. Walking onto the stage with a welcoming, comedic presence he grabs the audience with his gentle southern wit and comically introduces us to the technology or ‘Technological tricks’’ as he calls them. Using two mics to tell the story, both in his natural voice to narrate the story and another mic for his deep, gravely American voice when he is portraying Loren and speaking the character’s ever changing thoughts. McBurney’s performance as Loren is thought provoking. A man out of time and in a foreign land, trying to understand the Mayoruna Tribe’s beliefs. Going as far try and communicate with the tribe’s chief, who he names Barnacle, through what he believes to be a psychic connection.

The Encounter is by far the best show I have seen this year. This is not just a performance, it’s an experience that cannot be missed. McBurney’s passion project devours you and takes you away from this reality and into another.