Who wouldn’t be looking forward to seeing the loveable Pudsey, winner of Britain’s Got Talent 2012 along with his owner Ashleigh Butler in this new stage show currently touring the UK? Starring at Blackpool’s Beautiful Grand Theatre dating back to 1894, it was disappointing to see a very sparse audience at the early evening’s performance.

The performance started with cat burglars at the London Natural History museum and their attempts to steal the Bone Of Ruff for the despicable Dr Feline, who is intent on world domination, and the bone holds the secret to achieve this. Featuring Stevi Ritchie (X Factor and Celebrity Big Brother) as Dr Feline’s sidekick Karl, we were treated to a display of acrobatic dance moves by several dancers, with the comedy supplied by Ritchie throughout. As there are no programmes for the show I am unable to credit any of the other performers as they are not listed even on the flyers other than ‘featuring West End’ performers. I only knew of Ritchie as I recognised him from his past TV appearances. Also when researching online for more information it appears the cast does change.

After successfully stealing the bone, the chase is on to retrieve it and only the country’s top agents will do and agents Ashleigh and Pudsey are commissioned by the Queen. Via a screen at the rear of the stage we see a video clip of Pudsey on holiday and the request for his return to assist Ashleigh in this mission. The use of the screen features several times with messages from the ‘Queen’ and Mr S (remarkably looking like Simon Cowell). 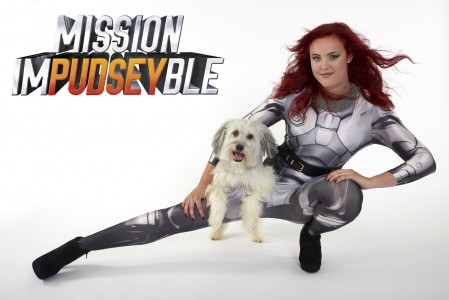 Pudsey’s journey home is shown on the screen and then he arrives in a red car for his first appearance on stage to many ooohs and ahhhs. This was 25 minutes after the start of the show and I feel was a little too long to wait in what I expected to be a show mainly about the dog. Pudsey made very few appearances, which were brief, until the end when he completed a ‘deadly assault’ course several times to defeat Dr Feline.

The show took on a pantomime feel with the usual ‘behind you’ audience interaction and adult innuendo (unnecessary and not always in the best taste for a family show). With a spy boss at headquarters by the name of ‘P’ you can imagine the toilet humour. The roles of ‘P’ and Granny McGrath are performed by the same actress who appears on stage as one or the other for most of the show. At the start the audience were given a secret code to chant of ’hide your secrets down the loo ‘but I have to say the reaction at this performance had to be encouraged each time. The water pistol shooting into the audience brought the first real responses! The code breaking, clue finding and puzzle solving with the audience was not really as evident as billed and I don’t think many felt involved.

There was some fabulous visual aids, featuring a Sand Snake as the guardian of the tomb, pyrotechnics and lasers and the jetpack with Ashleigh and Pudsey emBARKing on their mission. Dr Feline as the baddie gave a credible performance and the slapstick comedy with Ritchie probably saved the day, although sometimes it went on too long, particularly the sketch of Who, What and I don’t know, and a little too many slaps and kicks! Ashleigh interacted with the audience well but sometimes felt as though she was talking at them rather than to them. There were scenes with zombies, Russian circus performers, and Irish Leprechauns all adding to the story of our secret agents task of getting the bone back.

I asked several families with children of various ages for their views to get a wider perspective as I really wasn’t enthralled by the show, comments ranged from, at times boring as the children didn’t really follow the story, and disappointment at Pudsey’s brief appearances. Several loved the snake, the pyrotechnics and of course getting wet! Although they wished they had seen more of Pudsey the children were forgiving saying ‘He must get tired’.

There was so much going on during the performance I feel some of the best moments were lost in the attempt to cram so much into the show. With a full audience the interaction may have been more evident. Polishing up on fewer sketches I feel would be beneficial.

Overall the show was enjoyable for families but more of Pudsey is needed to truly earn the title of Mission ImPUDSEYble.

The tour continues around the UK until June 2016.