I had expected this afternoon's performance to be yet another Easter pantomime doing the rounds, but I could not have been more wrong. In fact, despite the title, Snow White barely featured in this new production, which told the story of two of the castle cooks from Snow White's birth right up to her wedding day. I love this type of alternate fairytale, and the narration and flashbacks performed whilst the wedding cake was baking was a fantastic concept. Unfortunately, the show was as flat as a pancake, if you'll excuse the pun.

It was quite simply, not a children's show. Although aimed at ages 4 ­ 8, the kids in the audience were bored and restless from quite early on, and the misleading title had several young girls in princess dresses asking, "Where is Snow White?” There was a distinct lack of audience participation which would have helped greatly. In fact, on the rare occasions that there was anything to join in with, the young audience adored getting involved. The energy levels also needed to be massively increased to get the crowd engaged.

There were still many positive aspects to admire about this production. I loved the rustic stage, with the different levels and props being used very cleverly, such as a step becoming the interior of the dwarves cottage, like a little doll's house! The dwarf 'eggs' was also a personal highlight. There was magical accordion music used throughout, and overall it felt like a very traditional, storytelling experience. The two ladies from Lip Service Theatre Company, Maggie Fox and Sue Ryding, who played twin cooks Beryl and Bijou, have a fantastic relationship on stage, and clearly work wonderfully together. They are obviously skilled at comedy, and I enjoyed their dry wit, but again, this was not aimed at the children.

I think the show has a great deal of potential, but needs to be massively reworked into a more interactive theatre experience for children. Giving the kids opportunity to join in with the songs and action will really help, as demonstrated through the 'noisy song' where the children could clap and dance along. With a dash of enthusiasm, a sprinkle of audience participation, and turning up the energy to high, this play might just about come together. The proof will be in the pudding. 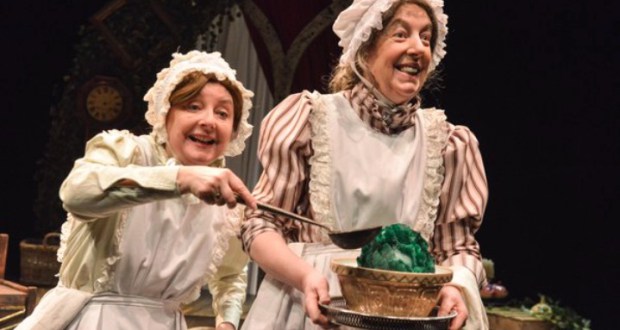