The Chairs - The Lowry, Salford

This was a very interesting and indeed quite extraordinary production of Eugene Ionesco's absurdist masterpiece, The Chairs. Presented by Extant, the leading theatre company in the UK to promote the arts and culture for the visually impaired and indeed both of tonight's actors were just that. With an exceedingly clever use of different textured floor coverings and sounds coming from different areas, the two actors were able to use the stage and move the props, entering and exiting from different places etc, just as sighted people would have been able to. That in itself was something utterly remarkable and amazing.

The only downside to this extraordinary event was that the pace of the play suffered. It naturally took a little longer for things to happen than it would have done with fully sighted actors, and there was also a voice-over which, as acting as also a kind of conscience for the actors, announced to the audience where they were going and what they were doing (this for vision-impaired audience members - and there were some) but also to repeat key words or phrases as a kind of echoed conscience. It was a really lovely idea and it worked well; it just slowed the thing down.

For me Ionesco's works are hugely hilarious and only really work when delivered at quite a speed. Therefore last night's production, as a piece of entertainment was a slight let down sadly. Also, the actor playing the Old Man was nowhere near old enough. He was not the one depicted in the publicity shots.

The set was good and worked well. This is an absurdist comedy, and it is set in an unspecified future with the idea that these two old people are the last living souls on our planet, and so putting them in a 'corroding research station' surrounded by continuingly rising water on all sides was actually a genius idea. I loved this. And to read that the whole set had been constructed out of recycled materials was an added bonus. 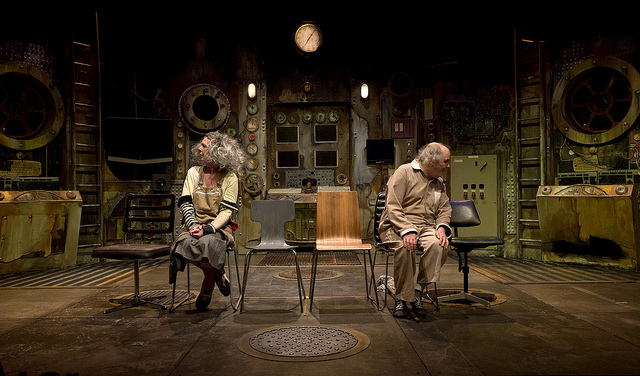 The old couple, in order to relieve the boredom perhaps, play games. One has the idea that they play these sort of games regularly. They are the last human survivors (or are they?) and isolated in this place with no human contact for years has driven them mad, driven them to play these games. The premise of the games is always the same. The old man will perform something for his wife. Sometimes something quite simple, sometimes something more elaborate. Today's game is elaborate. He has written a very important speech, something which will change the world and the way we live forever. Something very scientific. He has sent invitations out to all and sundry and has employed the services of an Orator who will speak on his behalf, as he is not good at public speaking. One by one the invisible guests arrive. Of course they do not exist, they are figments of the Old Man's imagination. (But with both actors being blind, this takes on a whole new significance). He introduces the guests to his wife and she in turn dashes around the pod to bring in a motley assortment of old and dilapidated chairs for them to sit on. The guests arrive thick and fast, his wife constantly asking, "who are these people?" and then rushing to bring more chairs. Finally the Emperor arrives and they all bow, and find him a seat too. And then, something unexpected happens. Another real 'human' enters. Dressed as a kind of frogman of the future. Something out of a James Bond film perhaps. This person has a means of communicating with the outside world strapped to their wrist, and a male American voice comes from it. Is it a machine? A robot? Of course the old couple are delighted. They think this person must be the Orator, and in their mentally deluded state usher 'him' to the 'stage' for 'him' to speak. Once he is there, the old couple now believe that there is a future for mankind and there is no longer any point in their existing any longer. They both say their goodbyes and jump from the windows into the swirling water below drowning themselves. Of course, this is Ionesco, so we never know who the 'orator' actually is. That's for us to decide ourselves.

The Orator was played here by the company's ASM, Alex Donaghty, and the old couple, who somehow managed to move around the stage so deftly, bringing a whole new meaning to Ionesco's work, as well as amazing me with their acting abilities, were Heather Gilmore and Tim Gebbels.

Further information on this ground-breaking theatre company and its ethos can be found at www.extant.org.uk