In May 2002, Miguel de Cervantes' novel Don Quixote was voted by around 100 renowned authors in 54 countries as "the most meaningful book of all time."

Written over 400 years ago, it tells the tale of a middle aged Spanish gentleman who reads so many chivalric romances he goes insane; he then sets out to bring back chivalry to the world, undo wrongs and rectify injustices.

I am ashamed to say that my knowledge of Cervantes' lauded literary masterpiece is very limited, so I was looking forward to learning more about the novel in this production, which is part of this year's Viva! Spanish & Latin American Festival.

From the moment I, and the huddled masses, were ushered down a blue-lit corridor, asked to deposit our bags and coats and then, upon entering, offered cushions to sit on (in the loosest possible definition of 'unreserved seating'), I knew this was not going to be an ordinary piece of theatre. 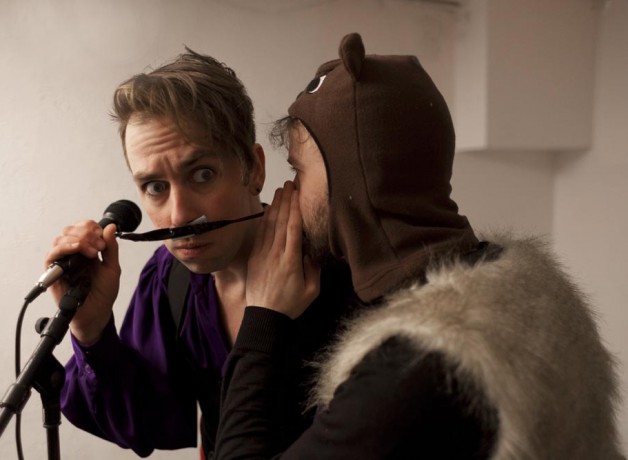 We were advised at the outset that the majority of the action would take place along the edges of the space, and that, not only would performers weave in and out of the audience but they might also, at points, request us to move, in which case, we should move.

I looked around and saw an equal mix of anticipation and trepidation on people's faces; nobody quite knew what we had let ourselves in for and some were warily eyeing up the nearest exit.

Over the next hour or so, shadow puppetry, story-telling, live music and audience participation all collided into one bewildering but satisfying exploration of the core themes of Cervantes' novel and what it means to be a Don Quixote.

In all honesty, this is a difficult production to easily summarise; there is no one definitive narrative thread that you can follow from beginning to end. It is part performance, part polemic. It is a meta mashup. It is joyfully non-conventional but then that is precisely the point.

Because we learn that Don Quixote did not follow society's rules. He was a man who looked at the world and chose to imagine what it could be rather than merely accepting it for what it was. Is that madness? Or is too much sanity, too much passive and unyielding acceptance of what is, more mad?

This is one of several questions posed towards the end of the night. Another, which I found particularly thought-provoking is: Are you being paid for making a contribution or are you being compensated for time wasted?

As the lights came up, I found myself reflecting on how it is all too easy to switch off and conform and accept; but how much more enriching and worthwhile it is to be an individual and to forge ahead in life according to one's innermost desires.

Other people looked as though they were reflecting on why they had wasted a tenner sitting cross-legged on a hard floor when they could have gone to see a 'proper' play instead, with actual chairs, and a plot.

So perhaps your potential enjoyment of the production can best be measured by whether you identify as a Don Quixote or a Non Quixote.

The five criteria put forward for what makes someone a Don Quixote is as follows:

1. Change the world for the better.

3. Society does not approve.

So which one are you?