Tessa Bide brought her show to Salford, mesmerising the audience with her one woman performance.

The tap dancing mermaid was Tessa’s first show, that she made back in 2013 and it has been touring ever since. Apparently she got the idea for this story when she walked down a rickety old boardwalk in Bulgaria in 2011 and thought how lovely it would be to tap dance on it. In August 2015 she self-published the book of her story that she now sells after each show or can be purchased from her webpage www.tessabide.com

Today we were immersed into the wonderful world of children’s theatre with all the components that little ones love. This captivating show was a feast of storytelling, puppetry, original sing-a-long music and all round entertaining fun.

The Tap dancing mermaid tells the tale of Marina Skippett, a carefree tap dancing young girl who loves nothing more than her tippy toe tapping. Sadly she lives with her evil old aunt (made from a lampshade and utensils) who definitely doesn’t share Marina’s love of the dance. In fact she forbids it completely, forcing Marina to sneak out every night into the moonlight and onto the shore via her wooden boardwalk stage to tap dance the night away. The story is narrated by the moon, a twinkling glorious moon, who enjoys watching Marina tap dance through life alongside her seagull friend. It’s on such a night that she first meets Leo a friendly foreign accented Merman. 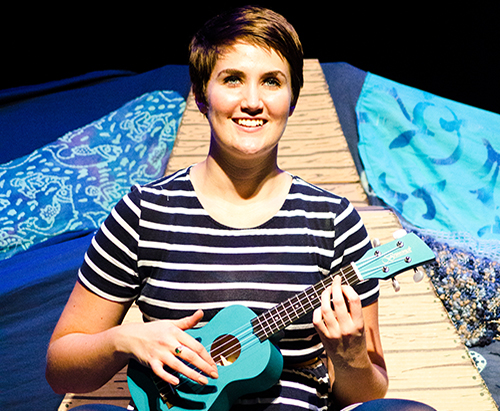 Tessa is a charming and very engaging entertainer who knows exactly how to successfully play to such a young audience, her wit and charm also has the adult members of the audience equally as captivated. With just the right mix of audience participation and silliness it’s hard to believe the whole show is only performed by one person as she plays to the whole auditorium and brings to life her puppets on stage. The energy this young performer has is commendable as she tap dances her way through the show as well as being a puppet master, story teller and musician.

The audience is treated to Conch shell blowing and two little ones squealed with delight when they were invited up to try it out. My 3 year old companion howled laughing at this point.

With mystical objects being passed through the audience and wishing shells the children were curious and excited to get their hold.

The scene where Marina tries to put on her cardigan has to be the highlight of the show for me, the young audience (and some adults) were beside themselves in hysterics as I am sure most of the pre-schoolers in the audience face the same problems daily.

The story concludes of course with Marina becoming a mermaid… and with moon magical wishes she eventually earns her title ‘The Tap Dancing Mermaid’.

I have to say at this point some of the script became a little sinister (a bit too like Grimm’s Fairy tales for my liking) with Marina being locked in a wardrobe and only being fed burnt toast or dust, then being threatened with her feet being chopped off was a little too brutal for such young minds. But of course with any good children’s story, ‘good’ conquers ‘evil’ and all ends with a ‘happily ever after’.

This is definitely a show I would recommend to go and see as it is true theatre magic, watching such young children interact and be entertained in the theatre is heart-warming. The shows running time is perfect for such a young audience as 45 minutes is just the right amount of time, and with the shows many facets of entertainment and quick pace it’s perfect.