Am I Dead Yet? - Royal Exchange, Manchester

All I can say is WOW! This was not an easy subject matter and the punches hit the spot every time - but they were delivered with superb timing and liberal dollops of humour to soften the blow. The message, nevertheless, ringing true.

Developed, written and performed by Jon Spooner and Chris Thorpe, this is a 55 minute non-stop wake-up call.

Starting the show with a high energy Hard Rock dance and dressed in white vests and underpants, you know right away that this is something different and something worthy. The pair are completely truthful, un-sanctimonious and in between reminding us of our own mortality, and also preparing us for it too; we also learn how to give CPR (as demonstrated on stage by a member of St, John's Ambulance) and learn of its importance. In fact, in amidst the singing there were some really startling facts. Some of which were

1. Approximately 200 people in the UK each day will die from a cardiac arrest.

2. The ideal response time for a 999 call is 8 minutes. However, with each minute you wait your chance of survival diminishes by 10%, so that if the paramedics arrive 8 minutes after the call you are left with a 20% chance of survival. However, if someone can give you CPR whilst waiting for the ambulance, then this vastly increases your survival chances.

3. If your heart stops beating you are still not dead.

Also packed into this hour were three stories, told simply and effectively. One about 2 policemen finding the decapitated head of a suicidee on a train line in the late 1970s, and the other about a little girl drowning in a frozen pond in the States, but the paramedics flew her by helicopter to hospital, deliberately keeping her body cold. 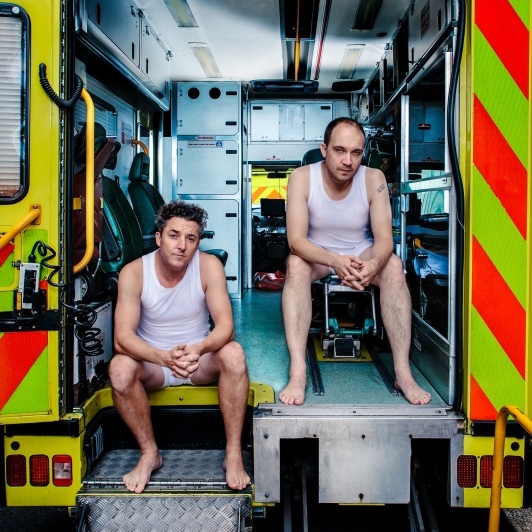 Despite having been in the lake for 40 minutes, and her heart had stopped bleeding - by keeping her cold until she got to hospital, where they pumped the blood out of her, warmed it slightly and pumped it back into her again, repeating this process over and over until eventually her heart started up again and she regained total health. The third concerned a distant future where we all could choose when to die, and be reborn. Off beat, but there still was an element of credibility to it.

There were songs, there was humour and the performance finished with an improvised song reading out all the things written on cards by the audience, who had been asked to complete a simple sentence before the show started. 'I think I will die....'

It was a tough subject matter, but as they said in tonight's show, 'If we face up to the terror of death, it might help with the life we have left'.

When I first took my seat and saw all the mics and amps, I thought I would hate it. I saw an electric guitar, a piano, and more amplifiers and cables than you could shake a stick at; and we were in a very small and confined space where even a whisper on stage would have been heard throughout the audience. And yet, from their first entrance until the end, I was absolutely hooked and mesmerised by the sincerity and earnestness of their performance.

Directed by Amy Hodge for Unlimited Theatre Productions, this is something that every mortal must see before they die!