Thought-provoking, Illuminating and Infectious - for all the right reasons!

So imagine. You're on an aeroplane. Flying from Uganda to England. During the flight, one by one, everyone begins weeping. Uncontrollably. Everyone that is except you.

And so begins Daniel Bye's engaging solo show as, sat amongst the audience throughout, he takes us on a journey - his journey, our journey - as we are forced to contemplate what happens next. Is this really what we would do? Or would we dare to be different?

The Unity Theatre offers the perfect intimate venue as we sat in a square with Bye moving amongst us, a suspended clinical lighting arrangement supporting his every move and with minimal but necessary use of props - an onion; a red chilli; liquorice allsorts. Lots of them by the way with different colours to reflect mutation. Blink and you'll miss it. Oh and not forgetting the tweezers. They almost brought a tear to my eye.

Bye's imaginative piece of contemporary theatre is driven forward through an unfolding story, punctured by the appearance of few characters, who we again are asked to imagine even as simply as being the person to our left or right. At points the action and narrative becomes quite raw and emotive and you wonder whether Bye is speaking from personal experience, in particular of loss, and one is drawn in a similar way to experiences past and present as well as contemplating a future untold which is a real accomplishment in a piece which assumes the intelligence of each and every audience member.

Bye regularly breaks from the story to provide some scientific explanations as he examines with us what viruses are, how they spread and the effect they have on society - scientifically, physiologically and psychologically - as we begin to appreciate the facts behind the stories that are presented to us as news on a daily basis as well as the misconceptions. 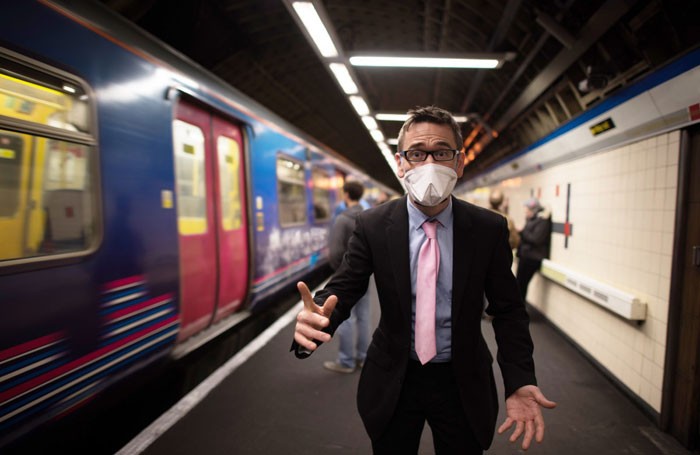 Bye cleverly exposes the contradictions and self-interest of modern society as he exposes the self-interested response of public bureaucracy and government ministers to what may only be hysteria rather than an epidemic; the frenzied media in search of their next 'story'; the Indian scientist who probably has a better idea than most as to what may be going on and how to tackle it but isn't properly listened to at any level or opportunity. We've all been there haven't we?

There is a real charm to Bye's conversational style of delivery and the audience warmed to him very quickly which is much to his credit in delivering this 70-minute piece and equally has the greater impact when in the same relaxed style he makes you consider whether our social mores of living our life through posts on social media and the fad for hash tag trending is in fact a virus in itself and not a good one at that.

I don't want it to appear that this is an overly serious piece and seem off-putting but nor do I want to spoil Bye's well-crafted plot. This is a very clever piece of observational theatre with superb audience interaction and delight in its presentation. I came away from the evening armed with new knowledge, a reinforcement of my natural desire to question and challenge modern media, and wonder at what would I do if faced by such circumstances.

Bye has completed a number of works wrestling with the question of how we all live together in this world, juggling comedy and tragedy, fact and fiction, rough and smooth. Further details can be found at www.danielbye.co.uk

Unity Theatre prides itself on presenting challenging, innovative, risky and unusual pieces that stems from its earliest foundations in the 1930's as the Merseyside Left Theatre which produced radical and experimental works. It's perfectly positioned in the Hope Street Quarter with great facilities to cater for all and the site itself has a fascinating history. Further details available at www.unitytheatreliverpool.co.uk