Tap Factory is so much more than a show with tap dancing in it. It is not only a visual treat but an audio one as well with a multitude of household items being used to create a percussive beat that cannot fail to get your own feet tapping and bring a huge smile to your face.

Stopping off in New Brighton as part of the current worldwide tour which is set to take in France, Germany, Switzerland, Shanghai, Liaoning and Beijing in the next 12 months it is clear to see this is an art form with a true international feel and appeal.

From the moment Jorffy Mayomba sweeps his way into the auditorium before the show begins it is clear this is a funny show as well as one that displays the immense talents of those on stage. Mayomba interacts with the audience without using a single word of English coercing people to ride broomsticks and copy his actions. This light hearted humour really hit the mark and relaxed the audience prior to the spectacle that was to be played out on the stage.

This truly international cast consisted of Vincent Pausanias, Jérémie Champagne, Karim Torqui, Lee Meadows, Andrea Catozzi, Maciej Labutin, Michael Newman as well as the previously mentioned Mayomba. Each one bringing their unique personality to the stage, not to mention unbelievable talents in a number of disciplines.

Choreographer and Artistic Director Pausanias wanted to create a show that would showcase the magic of tap at its highest possible technical level using world renowned tappers. He brought together Gilles Guenat, World Champion of Tap (elite category) and Champagne, finalist of So You Think You Can Dance, France. In collaboration with them Pausanias created this marvellously dynamic show known as Tap Factory. 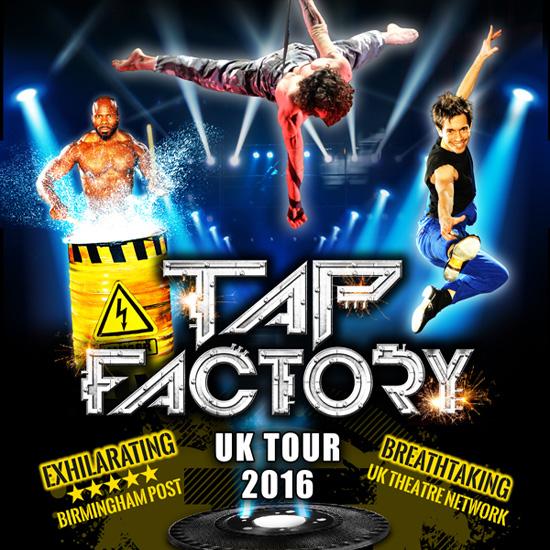 Vincent wanted to create a Tap Show, but he also used his large experience as a director of many different shows to introduce other disciplines as urban percussions, acrobatics, Hip hop and Comedy, to bring Tap Factory to another dimension. This fusion between all those amazing artists, part of the bests in their own disciplines and in the same time completely polyvalent, creates a unique show where amazing performances, exciting rhythms, energy and poetry are joining together with a great sense of comedy and humour.

The use of everyday objects such as step ladders and tin cans is inventive in itself and the closing of the first act using what seemed like an endless bucket of sand and bare feet was simply magical. There wasn’t a dull moment during this 2 hour performance which also excelled in the sound department. Microphones attached to the shoes of the performers gave a crisp clear sound and magnified the intricate footwork throughout.

If I had one slight complaint, and it is slight, it would be that the lighting could have been a little more imaginative. Whilst the lighting tonight did not take anything away from the performance, in fact at times it enhanced it, I just feel with 21st century technology a lot more could be made of the lighting plot.

Tap Factory is a joy of a show from start to finish and sends you out of the theatre with a smile on your face and a bounce in your step. From tap to hip-hop and mind blowing gymnastics there is something here for everyone. I for one will be checking the theatre listings carefully in order to see this show again when it returns to the north of England, I hope in 2017.