Graeme of Thrones - The Lowry, Salford

All things gratuitous that have made us gasp in front of out TV sets are joyfully lampooned in the writer’s witty send up.

Sometimes the strange paradox of life and comedy is the very human condition of finding humour in the grim. Ok, maybe I’m taking HBO’s Game of Thrones too seriously for some but at a certain level the lust for power, kniving, shifts in allegiances, backstabbing, civil wars and rebellions, are not just a reflection of history but at times an uncomfortable mirror to our present, which I feel makes the TV drama so compelling. There is more going on than just swords and sorcery.

I think as a result of our investment in well drawn characters and the power struggle for hearts, minds and watchdog boundaries a lot of the rib tickling is respectful and affectionate as it is here. A chance to celebrate and not tear apart as we follow chief protagonist, Graeme’s, misdirection and unrealistic deal securing attempts when staging his personal take on Mr Martin’s hefty tomes, aided and abetted by friends Bryony and Paul.

There is a lot of fun to be had with the premise of the; accidental parody within a play, based on a TV show, which we are apart of too, where Graeme’s noble attempt to realise his vision implode as his cast of three scupper the show. Egos cross and insecurities are exploited stage left as each take turns to hijack the project. 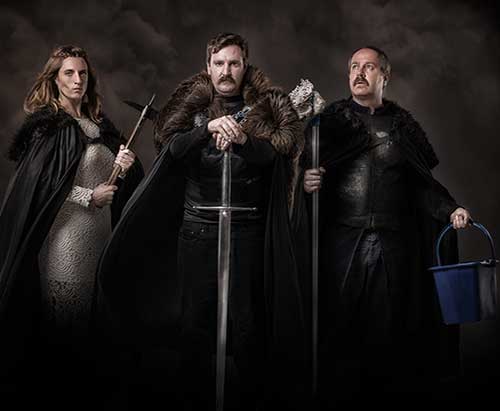 A lot of the charm of the production is the visual gags, so no prop spoilers here. The opening credits sequence clever and the DIY attempts at special effects big smile inducing (if you like the world of Be Kind Rewind, the Jack Black / Mos Def film, you’ll enjoy this).

Kudos to the writing, and, actors Ali Brice (Graeme), Libby Northedge (Bryony) and Mark Davison (Paul) for making their characters flawed and likeable and tackling the comedic challenge of getting it wrong and creating great stage anarchy.

This is one for the fans in the saturated but equally funny GOT parody universe and not really for the non believers. It recalled my teen youth absorbing all the lines in Aliens and dropping them into verbal scrums with your mates or more recently having our 6 year old dress as Darth Vader and play out the ‘I am your father, no, I am your father’ gag that never wears thin. I guess a big part of the pleasure is being in on the joke and fusing ourselves to the screen world.

The Quays Theatre was full and probably full of an audience who love the show and need that something extra to keep us all satiated between Mondays and the hesitation, just yet, to pick up that neat stack of very well written paperbacks.