Jim Cartwright’s new play Raz debuted at the Edinburgh Fringe last year and is now touring the UK. It is a one-man show featuring Lancashire lad Shane. He lives for the weekend and takes the audience on a journey of his standard Friday night out. It begins with a bang as a flash of light and a loud humming sound bounces around the theatre.

Shane stands centre stage wearing nothing but novelty boxers and sunbed glasses declaring “Friday night, first thing, the tanning shop, a good night minute blaster!” Immediately setting the tone and preparing the audience to witness his brilliant performance of his night out filled with birds and banter.

The actor is none other than Jim Cartwright's son James. 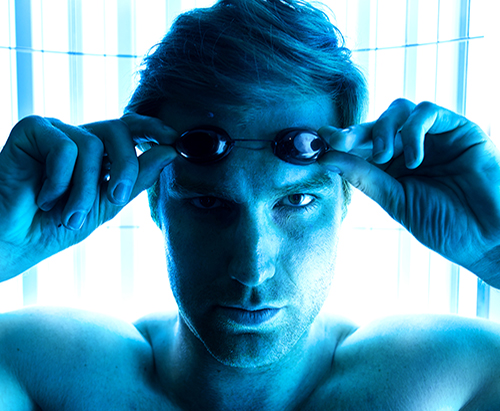 The thirty-year-old clearly being the ideal choice for this production with his good physique, Lancashire lad attitude and precise comic timing. He perfectly jumps from character to character with ease taking the audience on a hilarious and brilliant journey of his night. Going from pub to pub and imitating the wonderful characters he meets such as taxi drivers and drug dealers. The lighting, music and sound effects were all incredible, successfully setting the scene of where Shane was. Along with adding incredibly humorous elements such as location changes and the downing of drinks with perfect timing.

Jim’s marvellous new writing combined with James’ delightful performance had the audience in stitches from the first moment. The charismatic and high energy performance was a joy to watch from start to finish. An incredibly entertaining night out that’s not to be missed.