The Stars Are Made Of Concrete - Salford Arts Theatre

“We are all in the gutter, but some of us are looking at the stars.” Oscar Wilde’s infamous words might have given one hope, inspiring us to never give up and to always aim higher, even in our time of struggle. But to Bev these words seem to have lost their effect. After having been made redundant, she now goes through the repetitive weekly meetings at the job centre where she is spoken to with little respect by Carol, a worker at the centre. But it’s not only Beth who is looking for work. Bev’s son Adam, who never has had a job and in his mother’s eyes has always been seen as lazy, is struggling to set up a life for himself and his new family. Both family members are challenged at a time where opportunities are limited and the stars seem so very far away.

Michelle Ashton’s play is both witty and funny but also intriguing with its subject about working class people trying their best to find work within Cameron’s Britain. Humanising the people that for years are been made an unfair mockery by the likes of Jeremy Kyle and the media. The script balances both the comedy and dramatic scenes in the same vein as Paul Abbott’s Shameless. 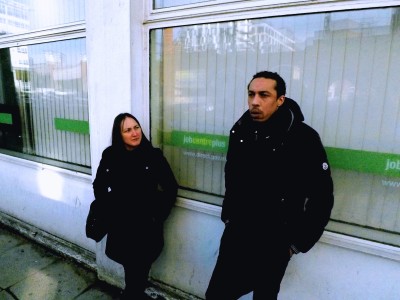 One moment we could be at the job centre where Carol (played hilariously by Joanne Dakin) has strange conversations with her mother about getting Botox at ninety to the Ashfield household where the tension between Bev and Adam can be felt in within the room, especially when he introduces her to his new partner Sinead (Leni Murphy). The character’s dialogue feels real and organic, not once become preachy or forced. Colin Connor’s direction makes sure that the play flows gently and easily adapts Ashton’s words and characters to the stage with his directional choices.

The acting was another glowing aspect of the performance, with each actor bringing the energy within each scene. Jarreau Benjamin and Zoe Matthews fit their roles perfectly as Bev and Adam each reflecting their character’s true emotions and ambitions both on stage and within the character’s video diaries. The supporting characters like Ash Baines portrayal of the sex obsessed Gaz bring the humour with each scene he is in as well as Leni Murphy’s single mum Sinead who brings the love and care when she is with Adam and the awkward tension when alone with Bev.

Though there are moments where the story does fall into clichés it still is a witty and upbeat with tremendous essence brought by its cast and production.