How To Make Me Happy - Lion & Unicorn Theatre, Camden

I’ve come to the conclusion you have to be in the mood for experimental, interactive theatre…especially when the venue is hot and stuffy which leads to a particular lethargy and non-participatory mood which really doesn’t engender the spirit of the production.

And so trying to be happy (as I believe that was the whole premise of what the show was about), I painted a fixed smile on my face and handed over my post-its to engage in the happiness project, aka How to Make Me Happy.

Faced with three people, dressed in drab, grey outfits with a painted on white smiley face, the set-up felt a bit too trite. I think I would’ve been more surprised or intrigued if they’d been dressed more colourfully – or just looked more interesting in the first place. 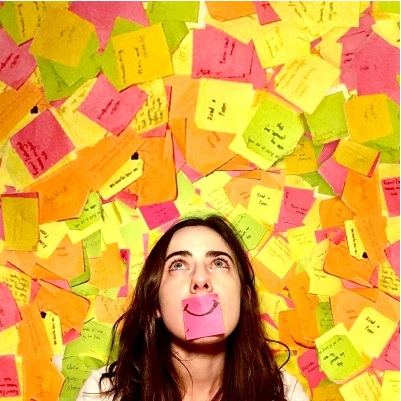 The narrator boomed out clichéd self-help phrases which seemed to vex and frustrate the performers to varying degrees, but which prompted them to action – that being to involve the audience and their pre-written post-its about what makes them happy.

Happiness infused onto the stage, this then enabled the actors the ability to move their limbs some more and delve deeper into the question of happiness. Although it was a bit of a mash-up between them and us and I found myself rather unsure whether I could ever be happy.

Which I think was the point.

I’m not sure if this play was also meant to depress you, but it did make me ponder on the predilection of trying to be happy and what it really means.

Which made me rather unhappy. And I’m not sure if that was the point.

In fact, I came away wondering if the play was about depression – or perhaps negativity, rather than happiness.

The pinnacle of the last “act” was the impromptu (I think) answer of one of the trio to what makes her happy, to which she replied “Crazy Golf”.

This then led to more audience participation with the majority of the viewers forming a crazy golf course on the stage. Yes, a crazy golf course. It was just as mad cap as it sounds and I found it hilarious, especially so when an audience member volunteered enthusiastically to be a windmill and stood flailing their arms while others pretended to be the whoosh of the sails. This was followed by the creation of a castle and a person as the ball. The action was over in less than 30 seconds and when the “ball” hit the “hole” there was a loud round of applause which left everyone feeling good.

Was that the point? I think so, I think this was a play that asks us to think about what makes us happy and to try doing that some more if we don’t want to get stuck in life.