Billed as a series of ‘talking heads’ monologues, Clare Rebekah Pointing’s one woman show, ‘With Child’, opened at the Camden Fringe last night. ‘With Child’ allows us to meet six different women, all of whom are pregnant. The women, however, hardly refer to the fact they are with child and instead talk about their everyday lives.

The question Pointing asks us is ‘do we as an audience judge them differently because of their impending motherhood’.

Pointing was witty and clever throughout and had the audience laughing before she even opened her mouth by pushing a large box on stage and removing all manner of different food items. When she did open her mouth for the first time it was to shovel in bread and humus as we met our first character of the evening. A pregnant woman who is told the changing rooms at the gym have swapped today. She decides to give the receptionist a piece of her mind. 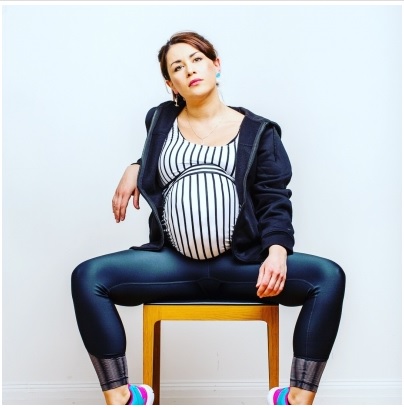 Are we already judging her hormonal state and ‘letting her off the hook’ because she is, after all, pregnant. Throughout the play Pointing subtly - as you’re having such fun you don’t realise - makes you question how you judge each character and whether their pregnancy changes the conclusions you come to.

Each character prepares food during their monologue and takes a bite before it’s dumped in the box and a new character emerges; my favourite snack being a nicely decorated cake, which was picked up, chomped and chucked! As Pointing changes into woman after pregnant woman (along to a great sound track) a pattern begins to emerge of women trapped or not allowed to speak their mind, women controlled by society, men, or their own preconceived ideas of what their life should be like. The outburst of the pregnant Zumba lover had everyone in the audience in stiches and the haughtiness of posh Cynthia was played to perfection.

With just a couple of first night hiccups, which will be soon ironed out, this one woman show is hilarious, brave and bold. The highlight of the evening was the last woman of the night. Up until this point many women ignored their pregnancies, talking of other matters, but as Pointing transforms into a young, in her own words ‘chavy’, pregnant woman, stillness dropped over the play. The hilarity disappeared and a meaningful monologue emerged about judging someone whose life we think we may know but really don’t know anything about. Beautifully written and truthfully performed, Pointing was completely believable as a lion hearted, young woman who won’t let her child ever think lower of themselves, just because of where they are from.

Deserving of large audiences ‘With Child’ is a laugh a minute with a poignant finale. It was wonderful to see pregnancy enhancing a woman’s work when at 33 weeks women are told to sit down and rest. Pointing shows no sign of putting her feet up as you could tell so much work had gone into this play. Each character felt like they had a real back story and you could see the whole life of each woman stretching out behind her. Pointing is a force to be reckoned with and it will be great to see where she goes next, ‘With Toddlers’ perhaps?

Clare Rebekah Pointing will be performing her one woman show again on 20th and 21st August at 7.15pm at Camden People’s Theatre.