Writer and director Lucrezia Pollice’s production of Breathe, at Tristan Bates Theatre, follows three housemates and a friend in their struggle to survive adulthood. This coming of age story explores friendship, anxiety, drugs, sex, careers and pension plans, and is a realistic depiction of the modern age struggle to survive in a competitive and sometimes unfair world.

Emoji pillows, pool inflatables, condoms, costa cups, kebab boxes, cereal packets, trainers and other random millennial decor make up a frame in the middle of the stage; accompanied by a bench and a couple of black boxes. The set screams ‘student’ and it is easy to say that ArtFlux productions have succeeded in their portrayal of shared accommodation through set and props. Costumes are simple and reflective of each characters personality. 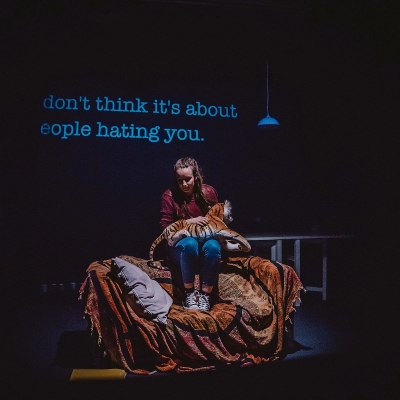 Breathe is centred around Maria, a young writer who suffers from almost crippling anxiety on top of the inevitable struggle of being a creative in a world full of pressure from people who “do normal jobs”. The writing throughout is mostly strong and sheds some light on the struggles of living with a mental illness. This is not only brilliantly portrayed through Zoe Templeman-Young’s (Maria) truthful and raw acting, but also through the pressure and stressher friends Eddie (Peter Silva) and Rachel (Olivia Valler-Feltham) are forced through whilst trying to support her.

Eddie is on the most part understanding, caring and the most sensible one of them all. However, his struggle to understand Maria’s mental illness at times conveys him in a different light and it becomes confusing trying to figure out where he stands in regards to supporting Maria’s battle. Additionally, Rachel often displays tough love but genuine care and love for Maria - both characters do. However, Rachel also displays signs of impatience and lack of compassion in regards to Maria’s chosen career which also proves inconsistent. As a whole, the characters in Breathe lack a certain clarity and it is difficult to know whether the inconsistency reflects the emotional rollercoaster living with those with a mental illness brings or whether it is the writing itself. Silva and Valler-Feltham display strong and focused work throughout and through their underlying storyline they become characters you warm to and root for - proving themselves as competent and versatile actors.

Maria’s lack of urge to help herself is enhanced through her reckless adventures and odd relationship with drug user girlfriend Sophie (Emily Olum). Sophie is unattentive and selfish and her presence on stage alone makes you angered and irritated - the reaction I am certain Pollice was aiming for. Olum’s performance remains gritty and truthful and she definitely shines throughout Breathe .

The technical elements in Breathe add a great touch during certain scenes, however at times they seem unnecessary. Voiceovers and videography play a major role within the production and ran smoothly every time. Understandably, ArtFlux are a multidisciplinary production company, however Breathe did not need every element forced into it.

Breathe was a strong piece with brilliant actors and delved into the trials and tribulations of mental health and postgraduate careers, in addition, some more insight into the supporting actors struggles would have been interesting to witness. I feel as though Breathe would have succeeded in exposing more of the truth behind anxiety with the technical elements stripped back and a deeper exploration into the illness itself.