Six of One - Etcetera Theatre, London

The only way to review this play is to give a spoiler alert, which is a shame, because once you know what it’s all about, that kinda takes away the “Aha” moment and robs you of the glee which I think is the build-up and game the actors are playing with the audience.

However, I will plough on regardless and you’ll have to read ahead knowing full well I’ve given the heads-up on any spoils.

So the play opens with seven men and women dressed in white overalls wearing yellow woolly hats sitting on wooden chairs on the stage. Confusing is about the best way to describe the next few minutes, while you as the audience member, try and make sense of the scene.

One of the women (Grandma/ Katriona Brown) jumps on a chair and screams loudly when a light comes on. Some of the people appear to be able to hear some of the others, but not see them, while others can hear and see - and it’s all a bit bewildering. And apparently it’s cold. And there’s talk of wanting to be in a pastry. And of trying to escape. 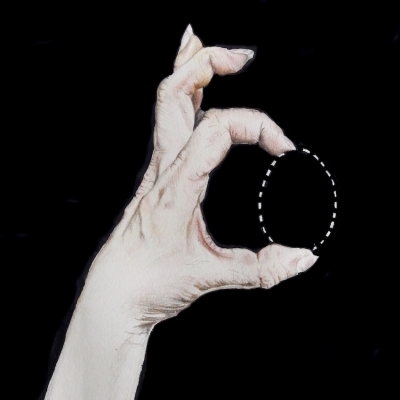 And then there’s a strange game of eye spy with everybody only being able to see a box. And I wonder if that’s something to do with the company presenting the play being called “Inside the Box Theatre”. And then a joke about salmonella and how that’s fish and cheese (I didn’t understand the cheese reference, but the fish is salmon!) And maybe I’ve given enough clues now for you to be able to guess what the actors were.

But if you were there, at least for the majority of the play, you wouldn’t really know. And that’s part of the guessing game and the fun element. I was thinking maybe they were some sort of escaped prisoners, I overheard a whisper from someone else they thought they were test-tube babies. I don’t know if they thought that because of the repeated Grandma reference to the crazy, wailing woman who was so afflicted by the light, but it’s one of those plays that’s open to interpretation so any idea is up for grabs.

I’m not actually going to give the game away, because I think that’s cruel and is all part of the play. At times I did feel perhaps the dialogue wasn’t as engaging as it could’ve been, but then trying to keep an audience in suspense is not easy, so I understand the need to try and drag it out.

Conceptually, this is a different take on presenting theatre and that’s what the fringe does best.