Mystery, friendships and a little bit of Christmas came to the Storyhouse in the form of The Secret Seven. This is Storyhouse’s first Christmas show and it is refreshing to see something new for Christmas other than a panto, something to bring children's imagination to life and this great piece of theatre certainly does that.

It was nice to see the theatre transformed back to the its intimate ‘thrust’ stage for this show, having the stage surrounded on three sides by audience, opening up the story and allowing the audience to pretty much be part of the show.

From the moment you enter the theatre you feel involved. Receiving a copy of the Cherrydale Times dated 22nd December, 1951. It includes stories of Cherrydale along with parts of the plot and clues to get you involved.

The staging looks great, the outline and roof tops of the town on the background and the Secret Seven’s meeting place centre stage.  The stage is transformed a couple of times by members of the company, live during action taking you from the meeting place, to a park, a hill and other places your imagination allows you to believe are there. Scene changes were slick and carried out very well by all involved. 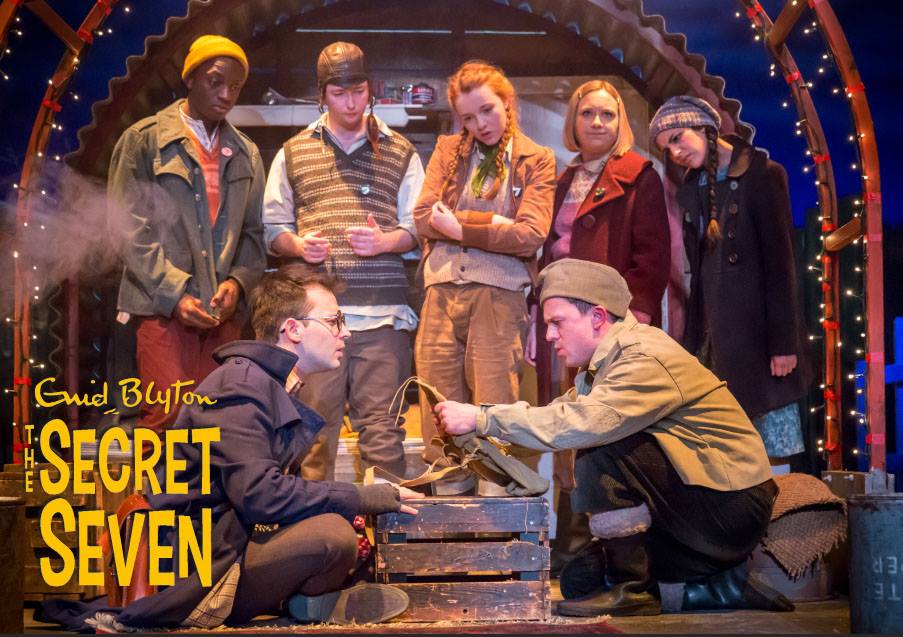 The ‘Seven’ were a great team, all working together to figure out a crime to help save Christmas. Each person’s character coming to life throughout the show and showing how each was as important as the others and all needed to work together to get the required results.

Peter Grainger is the leader and is very clear in his commands and how to lead but learns that sometimes being a great leaders means knowing when to be lead and listen to others. Harry Jardine gave a great performance as Peter. Peter's sister, Janet is played by Harriet Slater and she's very fair and doesn't like anyone getting hurt.

My favourite character is Jack portrayed by George Caple. He is the typical mischievous and daring one of the Seven. Caple captured the character of a child really well and was adored by many of the audience.

Anton Cross as George, Kaffe Keating as Colin, Molly Logan as Barbara and Aryana Ramkhalwon as Pam made up the rest of the gang. All portraying great characters with some lovely childlike qualities and as with the Secret Seven themselves, these seven actors shone when they were together as a team.

It was great to see some of the actors from the summer season return for Christmas. Barbara Hockday as the mum and musical director did a wonderful job, playing numerous instruments and making the mum a fantastic character.

Our Alice from the summer season's Alice in Wonderland, Rebecca Birch returns as part of the terrible twosome who are out the ruin everything the Secret Seven are trying to do. Birch is joined by Tillie-Mae Millbrook as Susie and Binkie and together are wonderful. Annoying young girls who want to be involved and get their own way but never quite do.

Director Alex Clifton has brought this wonderful team of actor/ musicians together to deliver a really tight, fun piece of theatre that people of all ages will enjoy.

The Secret Seven has been enjoyed over the years on book form but this is a whole new experience seeing these characters come to life and work together on this mystery to save Christmas.

As writer Glyn Maxwell says ‘The Secret Seven are all pretty different but play vital roles in solving the mystery. I'm a year or so, they may drift apart, but for now they all live and play together quietly learning to delight in their differences.’

Just seeing the look of utter joy on the faces of the children in the audience told me this statement is so true and this show is a hit and a wonderful story this Christmas.