With 2018 marking the centenary of the end of World War One it seems apt that theatre goers are given an insight of the hardships and life experienced in those difficult times for both soldiers and families alike. Entering its fourth and final tour, Rachel Wagstaff’s latest stage adaptation of the novel Birdsong, written by Sebastian Faulks, delivers just that, transporting us back to those days set in 1916-1918.

With a strong cast (directed by Alastair Whatley and Charlotte Peters) relating the story of Lieutenant Stephen Wraysford (Tom Kay), a young army officer with the unenviable task of leading his troops into the horrors of the tunnels and trenches and into the Battle of the Somme, will flashbacks to pre-war 1910 and memories of his passionate liaison with Isabelle Azaire (Madelaine Knight) a married woman, be enough to keep him focused on returning safely? We meet Jack Firebrace 'Sewer Rat' (Tim Treloar) recruited to the army for his mining skills and like many others, has little war training, Young Tripper, just fifteen years old (Alfie Browne-Sykes), impressionable, inexperienced, how will the horrors he is about to witness affect him? 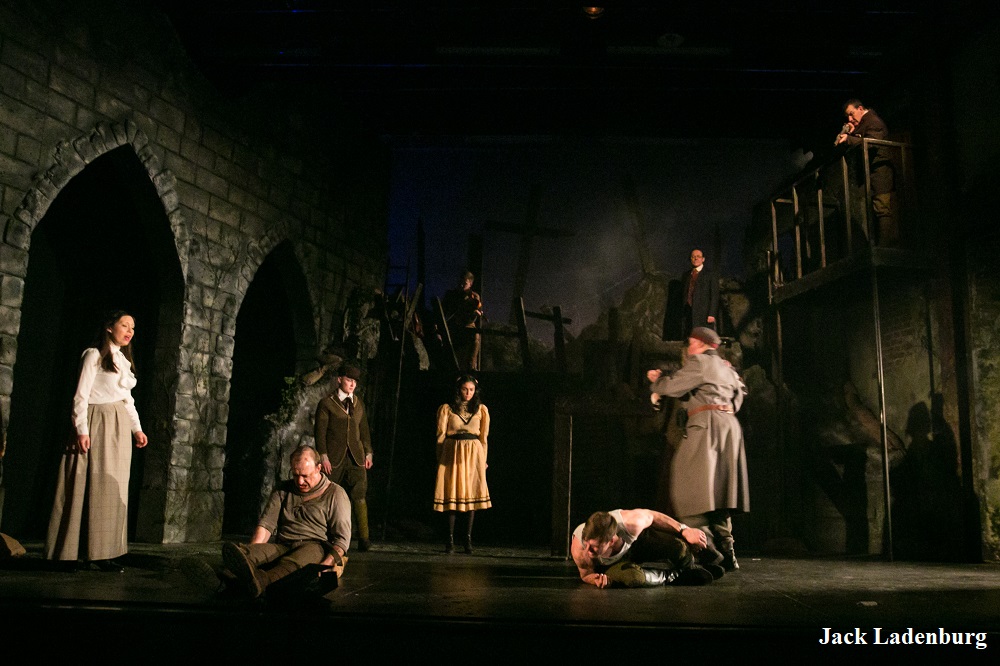 There are highs and lows for all the soldiers and it is often news from loved ones that can bring home the harsh realities of what they are facing and it is touching to see the camaraderie between the troops evolve. There are several uplifting songs between the men, accompanied by violin (James Findlay) along with sobering and haunting melodies, all wonderfully performed.

A well designed set by Victoria Spearing, evokes emotions from the start, depicted with a wooden cross dominating the skyline, a sombre reminder of the tragic loss of life for so many, never to go home again. Moving from romance to conflict and past to present is executed seamlessly with the addition and removal of furnishings enhancing the set. With magnificent sound effects of gunfire and shells dropping (Dominic Bilkey) and lighting effects (Alex Wardle for CharcoalBlue LLP) there is a real feel of warfare and tension building and the terrors experienced. I defy you not to jump as the first bomb drops!

Kay is fully immersed in his character Stephen from the start and the anguish and trials he faces is etched in his face whilst Knight (Isabelle) perfectly complements him. Treloar (Jack) faces challenges from home and you can feel his heartbreak and along with all the other characters you cannot help but become embroiled with their lives, passions, emotions and dreams. War is a harsh reality and Birdsong is a compassionate captivating tale of love, loss, courage and bravery and tugs at the heartstrings, it has many thought provoking moments and brings an understanding of those horrific times........ respect to all who endured them.

Birdsong continues at the Floral Pavilion, New Brighton until Saturday 10th March 2018 and for further information and tickets: https://www.floralpavilion.com/en-GB/shows/birdsong/info