Written by Patrick Hamilton, Gaslight first premiered on 5th December 1938 at the Richmond Theatre, London. It ran for 141 performances and has since been performed globally although it was performed under different names in New York (Five Chelsea Lane and Angel Street). Its film debut came with a British made version in 1940 directed by Thorold Dickinson, quickly followed by an American version in 1944 starring Ingrid Bergan who won an Oscar for her performance as Bella.

The play’s fascination stems from the slow psychological torture that Jack Manningham (Richard Shute) inflicts on his wife Bella (Catherine Rimmer). The play begins with Bella in good spirits and Jack agreeing to take her to see a play of her choosing. All seems well until Jack manipulates the situation by accusing Bella of moving a picture and hiding it. She has no recollection of doing this and Jack begins an evil attack on her mental state. To make her situation worse he then asks the servants to swear on the bible that they did not hide the picture making her feel that she is indeed losing her mind. In addition, Jack then accuses her of misplacing a bill for the groceries that he was going to pay for and we see the utter hopelessness of her situation. 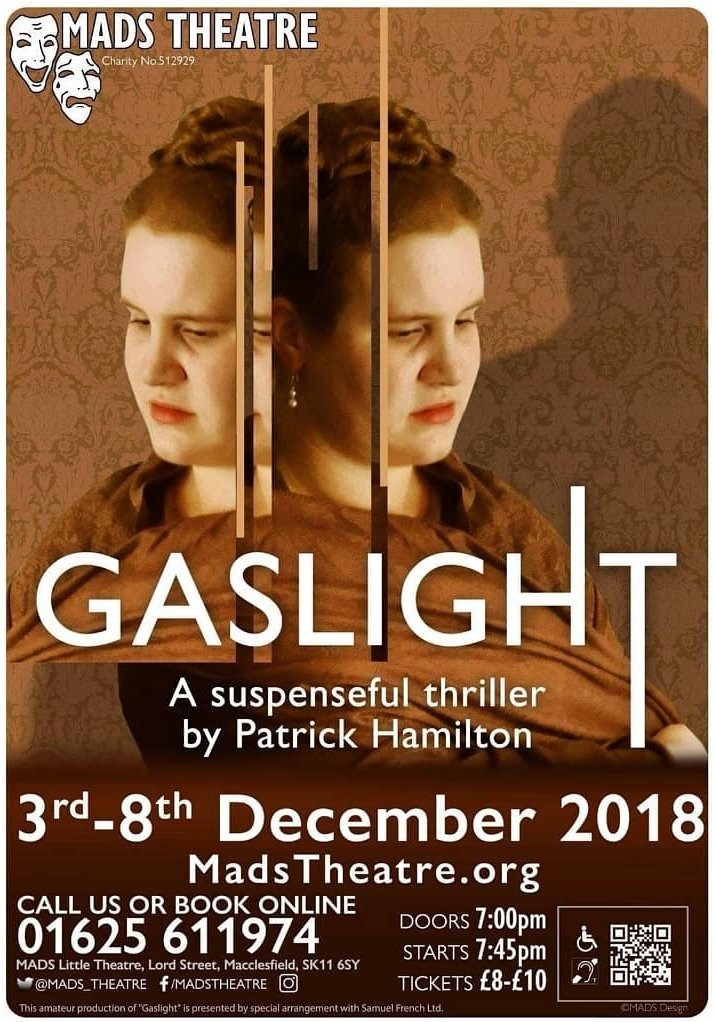 Richard Shute manages to portray the cold calculating misogynist Jack so well that the audience immediately mistrust him. Catherine Rimmer plays a totally believable Bella who we empathise with, her vulnerability is communicated without it ever feeling over played.

I immediately warmed to Inspector Rough (Steve Donnelley) as he enters the play with his East End charm, he finally provides Bella with a reason to fight her corner. An ex-policeman, Inspector Rough believes Bella is being slowly driven out of her mind rather than losing her mind. He listens to her concerns about the goings-on in the house and he realises he needs to act to stop Jack from institutionalising Bella.

Nancy (Caitlin Johnson) helps to undermine Bella by using her femininity to seduce Jack proving just what a cad Jack is.

From beginning to end the play has a professionalism from its use of the ‘gaslighting’ in the living room to help build the tension, the costumes (well done wardrobe department), which help to create the feeling of the time, to the period furniture and props.

There are some small slip ups when using props, but the audience is very forgiving when enjoying such a well put together and well-acted play.

We must congratulate Logan Westbrook for the way he presented the play. It stayed true to the original, with emphasis on detail and he was also able to draw the best performances from his actors. One would never know this was his directional debut!

For a small regional Theatre, MADS certainly punches above its weight. This period play is a lovingly produced revival of a classic thriller.