This year, St Helens Theatre Royal’s Easter Pantomime is The Wizard of Oz. Having seen The Wizard of Oz in its many guises and on many occasions, I didn’t really set out with any particular expectations. However, what an Easter eggstravaganza!

The opening scene introduced us to the ever youthful Linda Lusardi as the wicked Witch from the West. Linda looked as glamourous as ever in her green and gold sparkly dress and seemed to be thoroughly enjoying her role as ‘the baddy’.

The Wicked Witch was soon followed by her adversary, the ideally cast lovely Lucy Kane as Glinda, dressed in her beautiful fairy tale, glittery, silver gown was every little girls dream.

Our Dorothy was played perfect by the pretty, fresh-faced Mia Malloy, with a singing voice to match. We meet Dorothy along with a crew of Kansas Cuties, all bedecked in gingham and dancing to ’Can you feel it’. We soon meet Dorothy’s friends Hickory, Dickory and Doc. 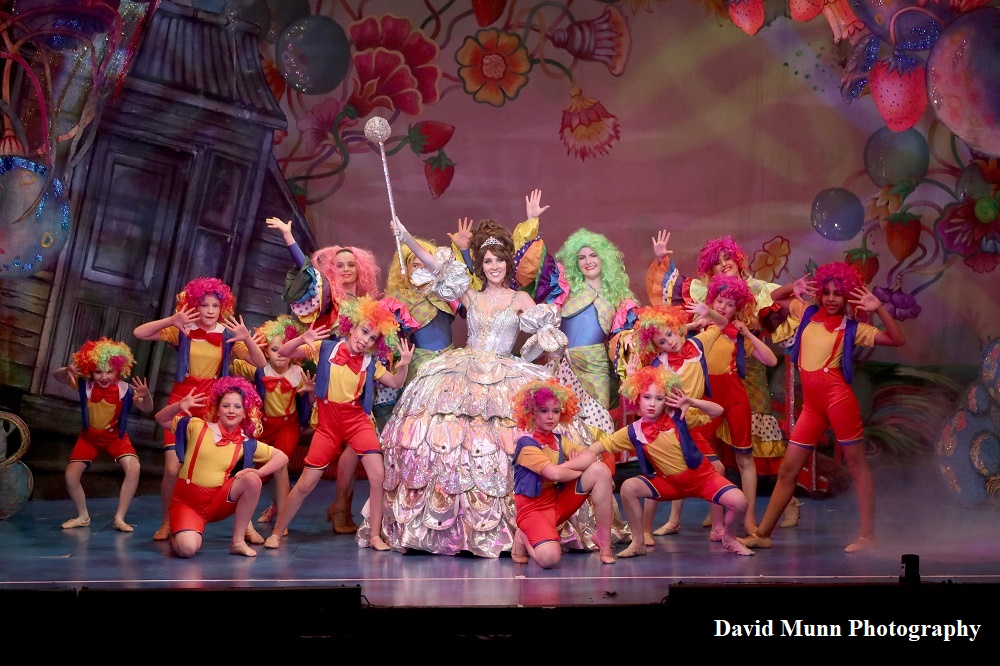 The story remained mostly less true to the original with the traditional songs, such as ‘Follow the yellow brick road’, If I only had a heart/brain’, and ‘Somewhere over the rainbow’, which the show would be The Wizard of Oz without. However, this was interwoven with more contemporary and pop songs, ensuring that the ensemble dance numbers were vibrant and energetic.

The storm and the homecoming had a multi-media approach with sepia video footage perfectly recreating that of the film, lightning and sounds adding atmospheric effect of the storm. We even had the side show of a circus being enacted by neon puppetry, against a black backdrop. The show had everything, including flying monkeys.

The star of the show was without reserve Reece Sibbald as the Scarecrow/Hickory, his rendition of jokes, showing that ‘The old ones are the best’ certainly rang true with his patter down to a fine art and in typical panto style, the double entendre thinly disguised adult humour. However, his other main talent was that of using his physicality to comedic slapstick effect, sending rippling giggles throughout the children in the audience during his performance. Sibbald was the main instigator of the audience participation, with audience member and good sport ’Lisa’, being his target for the evening. Sibbald also brought a handful of the tiny audience members on stage to do a rendition of ‘Chick, chick, chicken’. However, a word of warning, at times the participation bordered on immersive theatre for those in the front rows!

Local lad and up-and-coming star Harry Moore’s, humour was gentler than that of Sibbald but no less effective with his expressive facial features, he proved his mettle the Tin man/Dickory.

Whilst Steve Arnott played a very solid, and cuddly, cowardly lion/Doc, reminiscence of the one and only Bert Lahr.

Choreography was perfectly timed, energetic and effectively performed by an ensemble cast. With the rainbow coloured munchkins being a personal favourite. Although it would have been useful to know which of the groups performed today so that a direct mention could have been given to them.

The sets of Munchkinland and the Emerald City were high quality, as were the glitzy, sparkly costumes giving the show a glamorous feel.

Jay Lusted brought the Wizard of Oz to life, as his portrayal is exactly how I would have imagined the Wizard. Not forgetting Buddy who was remarkably well behaved as Toto and added that extra cute value.

The panto was fresh energetic and fun, The cast seemed to be having a great time and this was clearly infectious as the audience, both young and old were spellbound for the whole duration of the show.

The show is on until 22nd April and a definite Easter Treat for the whole family.