The Wind in the Willows - The Brindley, Runcorn

The cast and crew of Encore Productions should be extremely proud of themselves after delivering an outstanding performance for opening night of “The Wind in the Willows”.

The storyline is based on the children’s novel of the same namesake which was first written in 1908 that follows the adventures of four furry animal friends. It was quite astonishing to see how a story which is over 100 years old has stood the test of time and been transformed into a massive, fully fledged, musical spectacle.

When Mole and Rat meet, they quickly form a friendship and the story follows their adventure together alongside Toad, Otter and Badger. A storm brews when Toad steals a motor-car and ends up in huge trouble with the law. Later, we discover that the menacing Weasles have also taken over the one and only ‘Toad Hall’. Will Toad escape prison? Will Toad hall be saved? This is a story which tests friendship, love and loyalty and brings good versus evil into the spotlight. 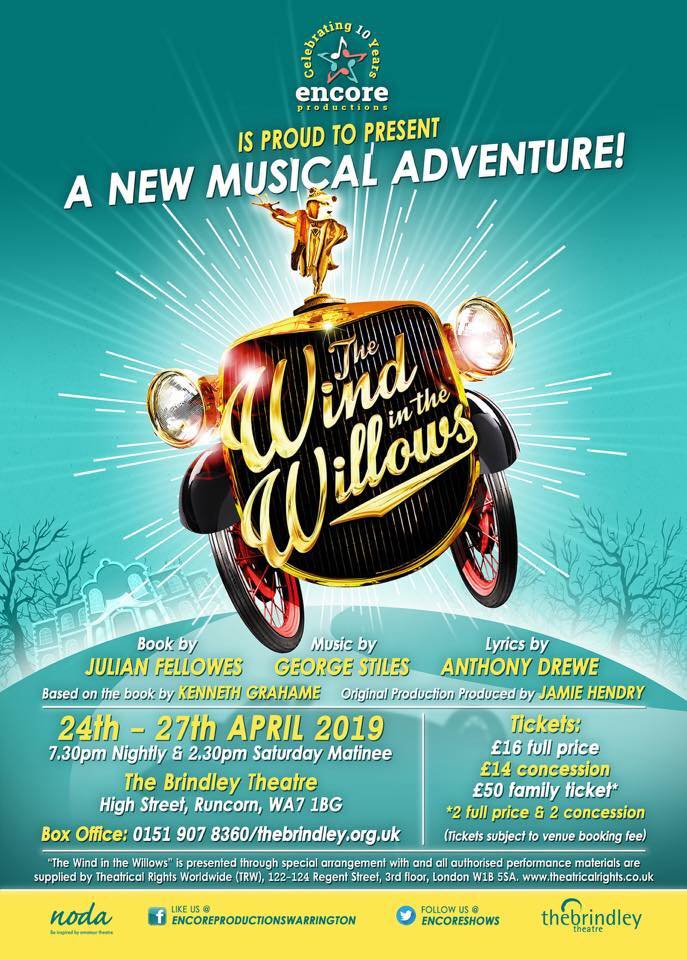 The first thing to note about the musical is the sheer size of the challenge, the score is mega and the casting is huge but luckily for Nick Cupit (director and producer) Encore have enough talent and more to pull it off. The opening number ‘”Spring” brought goosebumps as the whole cast come forward in a harmony that was pure and perfect alongside the vibrant orchestra with compliments to Andy Davies, Musical director. The show continued with the introduction of characters and the difficulty of the characterisation within this production should not be underestimated. The actors not only had to bring individual emotion and personality whilst delivering the storyline but they had to do it in an animalistic fashion. But again, encore accepted the challenge with style and showed no weak links within their cast, from the hedgehogs to the horse, each and every one was brilliant. Mole, played by Blair Smith was beautifully characterised, soft, gentle, funny and altogether lovable. The friendship between Mole and Rat, Josh Hankey, was truly endearing. Mr Toad played by Seb Farrell was ‘spot on’ as Mr Toad, a criminal who the audience were rooting for from start to finish. However my favourite character was played by Dan Richter who was completely captivating as Chief Weasel. He never came out of character and led his mischievous crew, alongside the also brilliant Chris Doyle and Annabelle Taylor, with swagger and style.

The above was only topped off by a glorious set and lighting that added to every scene- there really was nothing spared in this show. I noted a number of my favourite scenes and ended up with a very long list however I was always excited to see those pesky weasles and foxes come on stage to do their thing. This group were absolutely fierce and fantastic; it was like the hyenas from the Lion King met thriller when it all came together!

This show is filled with different characters, accents, personalities, voices, colours and costumes which make it so very fascinating and entertaining to watch. I would advise the cast to be mindful of their diction as some of the words / song lyrics were lost on occasion. It was unclear whether this was due to accents, technical difficulties or the nature of the melodic storyline.

You would travel a long way to find an amateur production as professional as this one and it is incredible to watch what talented people can produce from their hobby. This kind of quality would not look out of place at the Empire or Palace Theatres and I would urge you to support this quirky, wonderful, fun production at the Brindley Theatre this weekend. Wind in the Willows continues this weekend, for more information and tickets please visit https://thebrindley.org.uk/