Witness for the Prosecution - The Brindley, Runcorn

I saw my first Centenary production earlier this year “Strictly Musicals” and was spellbound by the sheer talent and diversity of the group that as I sat in the half full theatre to observe their latest production I was filled with nervous anticipation and wonder.

This production was to be something more sombre and traditional as the company were to give their interpretation of the Agatha Christie’s famous best- selling novel “Witness for the Prosecution”. The stage was set up in late 30’s style décor with desk, fireplace and drinks cabinet and opened with the talented Megan Maher as the maid Greta and Marcus Cameron and Michael Pirks as Carter and Mayhew, as they awaited Sir Wilfrid Robarts QC – played by the stupendous Mark Murphy to arrive from court.

As Robarts entered the stage with the likeable Leonard Vole (played by the awesome Matt Orrillard) the dialogue had us instantly enthralled with the plot of the young man (completely out of his depth) having been accused of the murder of a woman he had recently befriended. 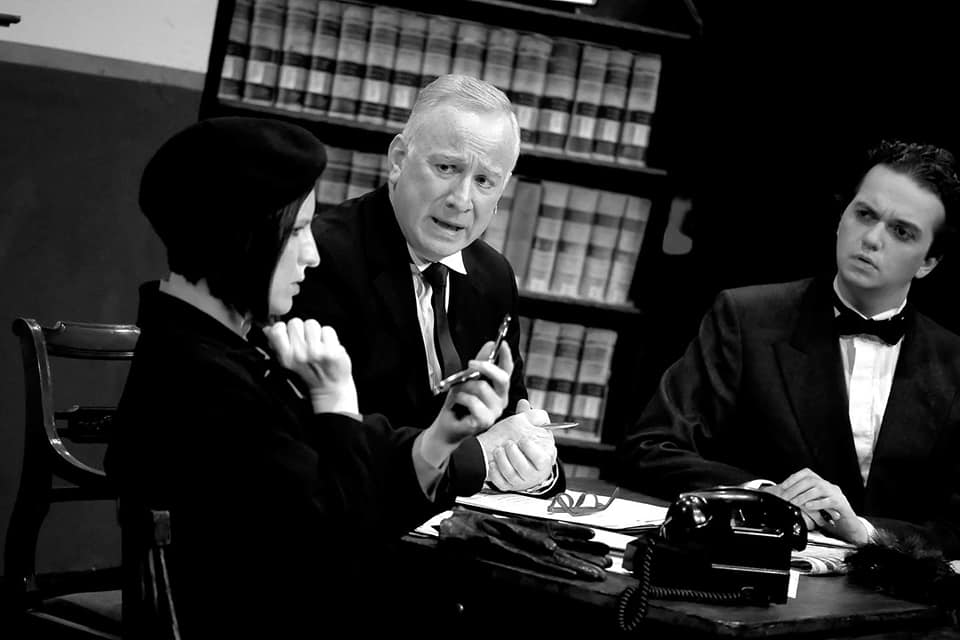 It is difficult to do a review on a ‘who done it?’ play and be conscious not to ‘give anything away’ – so I won’t (!) but I would like to inform you – the reader- on some aspects of the play that you should know if you are considering attending the performance. Each and every cast member showed sublime talent and even though it was opening night the performance was faultless. The play was delivered in 3 sections and the second act started innovatively with Michael Pirks superbly addressing the eager audience as the jury. He even got the audience to stand up to take the oath (which worked really well and got us all involved – genius!).

The second act had the stage set up with an authentic court room and it all felt so real and daunting that the audience were immediately intimidated. Both Robarts and the QC for the prosecution Miss Myers (played by the fabulous Philippa Shaw) had us really keen to listen to each witness and soak up their information. The witnesses were again all played superbly- there was Chris Blake (as the inspector) Ria Hall (as Vole’s sterile wife Romaine), Hayley Northley (as the doctor) and Janet McKenzie (the housekeeper) – played by the astounding Marylyn Baxter – who had the audience – sorry jury- laughing hysterically with her great persona.

The plot thickened as each witness gave their evidence on how the ‘old lady’ (at 56!) was murdered. Each witness was plausible and along with the splendid Nathan Reid (the Policeman), Gill Bourke (the stenographer) and the marvellously cast Mike Hall (the judge) we all felt that this trial was as real as any we had witnessed first- hand (or on TV).

So, the final act opened with both Mayhew and Robarts in a street contemplating the witness statements received in court and then (again keeping stum as much as possible) the plot then moves at a pace from thrill to thrill and as the curtain dropped the audience were left agape! There were actually groans from the audience as people’s assumptions were proven wrong or right.

The performance was superb from start to exciting finish and if you are intrigued as to how this plot develops you need to see this performance yourself. Go and see this classic, see who you think is innocent or guilty and be enthralled.   Very Enjoyable! Each member of this marvellous group did Agatha proud – well done!