This Olivier Award winning play written by Jessica Swale is the latest piece to be performed by MADS. The play follows the Restoration period when Charles II was restored to the throne and theatres were built or re-opened. It was at this time, that Charles II decreed that all female roles should be played by women. This opened the door for women to finally appear on stage. Nell Gwynn was one of the first actresses to take to the stage when the restoration theatres opened in the 1660’s.   Nell performed at the ‘Theatre Royal in Bridges Street’ (also known as The King’s Theatre); built by Thomas Killigrew and inhabited by his acting company called ‘The King’s Company’.

This bawdy comedy begins in the theatre, with the performers playing their parts and Nell (Chelsey Sayward) selling oranges to the audience and shouting bawdy remarks to the actors on stage. Under the direction of Francesca Dykes, the full theatre was used, with the actors performing within the audience. 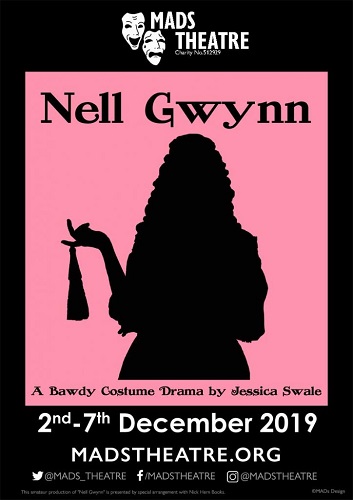 This comedic beginning whets the appetite of the audience for what was to come.

The stage was dressed as the rehearsal room of the theatre with a special area for the King to sit when he watched plays at the theatre.   The set remained largely unchanged for the performance. This generally worked, but I do feel that the lighting was sometimes too stark and would benefit from a little toning down, considering that in the 1660’s, the theatre would have been candlelit!

After Nell is tutored in acting by Charles Hart (Luke Oldham), Thomas Killigrew (Keith Oldham) takes a chance and employs her as an actress.   It is now that we begin to see the play unfold and the joy of theatre being performed once again.   We can take a glimpse into the playwright’s mind as famous writer John Dryden (Richard Probyn) (who was the first poet laureate); shows his frustration at being asked to write on the hoof as it were. To keep the audiences coming in, there was a high turnover of plays in more of a repertory style; so, writing had to be prolific.

I feel that it is at the point, when Nell (Sayward) takes on the role of Florimel in the play ‘The Maiden Queen’ and she meets Charles II (excellently played by Peter Munro), that the play really takes off. There is a chemistry between Nell (Sayward) and Charles (Munro) which creates a belief that there was real love between the two.

There is a scene within the play which I do feel needs to be tightened up and this is when the cast sing a song together before ‘The Maiden Queen’ and I felt the singing could be improved, but tonight was the first night so I am sure this will get better.

Once again, the costume department have excelled and must have been kept very busy as there are multiple costumes changes. The attention to detail is of a professional standard and to be congratulated.

Notable performances from Chelsey Sayward (Nell), Peter Munro (Charles II) and a very amusing Andy Loxham (Edward Kynaston) who plays the male actor pushed to one side by Nell who took over his female roles.

If you enjoy bawdy comedy with a slice of history, then this is the play for you!