It is a packed house at the Lowry's Quays Theatre... apart from five seats on the front row... obviously the worst place to have a gap. Russell Kane bounds out onto the stage, a frenetic ball of energy: black suit, black shirt, thin as a pipe cleaner, perfectly sculptured hair. He is immediately aware of those five gaping front row seats and comments to a poor lone young woman, whose five friends are running late. He bounces backwards and forwards across the stage, never resting, never still, constantly pacing and skipping and dancing, speaking rapidly with rollercoaster enthusiasm. He starts off by having a good natured go at Manchester and Mancunians, and says he's allowed to do this as he's "married in"; his wife, Lindsey, is from Manchester; so every time he mentions her (which is a lot) he switches easily to a bow-legged Manc swagger and a half-doped northern drawl, which is hilariously funny.

He also has a go at his home county, Essex, and the TOWIE-type people therein, which he seems to be one of. From an early age he was fond of superficiality, trendy clothes, sunbed tans and show music, which greatly concerned his father. This leads into a hilarious anecdote where alpha-male dad, Essex Dave, discovers his fifteen year old son furtively self-tanning in the shed. What father doesn't share this same fear? This is hilarious, visual comedy, the looks, the expressions, the timing, all perfect and the audience are in stitches. This episode resulted in his dad, now sadly departed, calling his son "Gaytan" for the rest of his life. Although he's gone, Dave and his aggressive Essex accent pops up several times throughout the rest of the show. 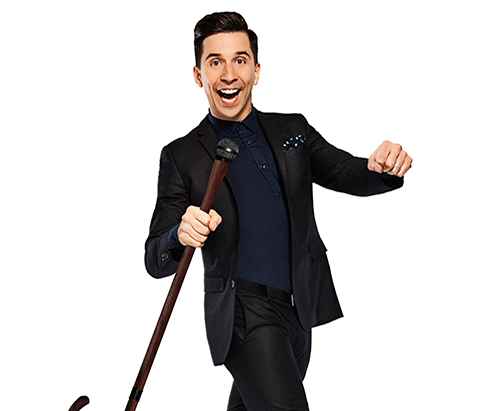 This first section is basically the warm up gig; Russell chats with the audience and talks mainly about age, basically the moment a man comes of age and realises he's an idiot.  He says he's addicted to sugar, which could explain his seemingly limitless energy. Also, he seems to be channelling Michael Jackson as he repeatedly does soundbites of high-pitched Jackson vocals and snatches of his familiar dance moves. I've not seen Russell before, but he assures us this isn't usual and he doesn't know why it's happening, but it adds to the furiously paced and sometimes surreal proceedings.

The second half of the show, the big half, is 110 minutes about Russell's recent experiences of fatherhood. Now, I can't relate to this and it's not a subject I'm usually remotely interested in; in fact people talking about their children would usually have me running for the door, but Russell brought his observations to life with his huge stage presence and his energy fuelled presentation. You couldn't possibly sit there and not listen to him. It's difficult to talk about his material, because it's very visual, there's a lot of physical comedy in the way he tells a story. He moves, he engages, he re-enacts. It's an adult show, it features adult themes and adult comedy. Apart from learning about their conception, kids would be lost.

I haven't got many notes about this part of the show, the beautiful life-changing story about the birth of Russell Kane's daughter, because he made me cry. Cry laughing that is. I cried solidly for about half an hour and so did everyone around me. I couldn't see the stage for the tears and my cheeks were hurting.

Some of the funniest moments were observations about his in-laws, especially proper northern Aunty Christine, who he said has a tight perm and groans every time she moves: cue hilarious visual representation of this from Russell. The row of women behind us were shrieking with laughter. You have to see his physical comedy to appreciate this. It was completely side-splitting. At the end of this story a spotlight came on to reveal one of the shrieking women behind was Aunty Christine herself, presumably hearing the routine for the first time.

That's all I can say. Russell Kane's writing and observations are spot on and his performance is fast and loud and gut-wrenchingly funny. To call this stand up is under-selling Kane's very physical performance style. It's a hilarious show by a hilarious, visual comedian. We all need to laugh more and it's a long time since I genuinely laughed till it hurt.