Comedy, it’s subjective. I personally think it's one of the hardest things to review; two people can leave a show with totally different opinions, and that's what comedy is, it only works if you find it funny, nobody leaves a stand-up comedy show to say 'I didn't laugh once but I loved it'.

So, I'm at the Lowry theatre this evening for Jimmy Carr, the moment I mention I am going to see him to people I know earlier in the week; they all tell me it's whatever the complete opposite is of political correctness, but I've seen Carr on TV shows such as '8 out of 10 cats' and 'the big fat quiz' and he always comes across funny so I thought, I know it's going to be funny, and true to my initial thoughts, I did laugh, in fact I laughed before he even came on stage with a video introduction which was used as an audience test and I really think we were tested tonight but maybe not in a good way.

As Jimmy walks out on stage, he has a certain swagger as the fans in the audience applaud loudly all seemingly knowing what they are letting themselves in for over the next two hours.

The jokes come thick and fast, some good, some bad and some very ugly but as they came in so fast, you had forgotten why you were outraged at the last and if you'd be laughing at the one after.  As Carr sends out 'test jokes' at the start to see our reactions, I couldn't help feeling that it was going to get more and more offensive as the night went on. 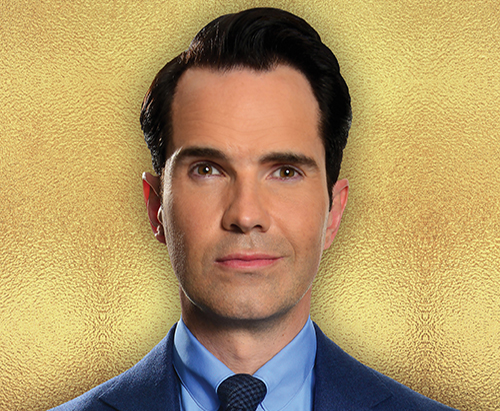 And I was right, and yes there will be people reading this who will say 'yes but it's funny' or 'you know, it's only a joke' but what most people don't realise is how brutal it actually is, no one is safe, and I would love to say that it was edgy and something different but it wasn't, it was dubbed 'the greatest hits' 'ultimate Gold' show but it just felt tired, old and offensive. Any comedy show where people who have paid nearly £30 a ticket have to leave early because they feel bullied is not anything to laugh about, Jimmy takes it too far, and is not necessary.

And yes, you do find yourself laughing at the jokes, whether it's out of shock, disgust or a strange sense of humour it happens, but you don't particularly feel good about yourself afterwards, there are some moments which are funny but they are not the ones when he's glorifying rape or paedophiles, because why is that funny, no what is humorous and probably one of Jimmy Carr's best skills is the way he puts down hecklers, and this is fair game.

If a member of the audience decides after a few too many pints of beer that it's time for their time to interrupt the show, Jimmy deals with them and it is funny, genuinely funny, brilliant even.

When Jimmy is making fun of people of minorities who have done nothing to provoke it, then it feels uncomfortable, and by the middle of the show, the novelty of being shocked has worn thin and tiresome and you start to wonder why you found any of it funny.

Throughout the show, there seems to be a real sense of dislike for the opposite sex by Carr, and as the women of the audience laugh it off as women are belittled and downtrodden, I can't help feeling this isn't right. Why does it feel like Jimmy Carr's jokes belong in the 1970s along with uneven pay and casual sexism? It's got old, it's got boring and I really feel that someone needs to say, you know what it's not actually funny to talk about women like that, joking or not joking.

I may seem to be coming down very hard on tonight's performance, and there was moments which I enjoyed and there was moments when you could see Jimmy's comedic ability and flair; the audience text in questions section was very funny and Carr's ability to come back quickly with jokes is remarkable and you know that there is a good comedian there, he's just got lazy with the jokes.

To quote the man himself, ' the audience are genius', they decide what's funny' and to be frank, I didn't feel like a genius laughing at Jimmy's jokes, I don't think anyone could be proud of that, more silly, misguided and dirty.

He has the ability to do so much more but yet he decides to play it safe with an old, boring and offensive style of material, I expected a lot better, disappointing.