Tom Allen and Suzi Ruffell took the stage together, welcoming the audience and they both seemed genuinely pleased, if not a little relieved, that Studio 1 was full. They explained that it was either first tour together and they were both going to do their Edinburgh 2016 shows. They seemed really relaxed with each other and engaged the audience - we learned later that they were very good friends.

Suzi Ruffell initially seemed ill at ease with the audience. She’d already told us that she was jet-lagged after returning from New Zealand but her flow came in waves after the audience responded in ways she wasn’t expecting - this was very different demographic to an Edinburgh audience. It took a little while but eventually a strong rapport was achieved and she relaxed into her set. Her show was entitled ‘Common’ and in it she described her humble, working-class upbringing in Portsmouth and how she found the love of her life, a ‘baby’ and a job in stand-up. Suzi was very self-revealing, open and honest in her stories. There were moments when she reminded me of how Russell Kane talks about his own family, but Suzi identifies as female and a lesbian! 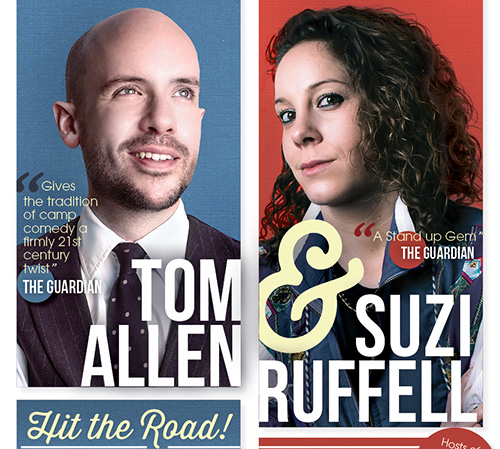 My highlight was the moment she started talking about her dad’s “skiing holiday” in Italy. She was in her flow and talked in a way that made me and my companion forget that this was a stand-up show. It was a heartfelt and painfully honest recount that really engaged the audience. We enjoyed the story and the built in humour and a few jokes were perfectly weighted and timed.

I definitely think Suzi Ruffell is one to watch. After all, as she said, we need another a lesbian voice that isn’t called Sandi, Sue, Clare or Zoe!

Tom Allen took to the stage with his usual bravado and self-aggrandisement. It was all in good humour with his familiar twinkle, knowing looks and cheeky smile. He reluctantly continued the stand-up convention of interacting with the front row - his words not mine! He’d initiated this during the opening but now he milked all he could from it. He gave up because, he said, this how isn’t about us it’s about him! Later in in the show he gave a similar reason why he wasn’t talking about Brexit or Trump.

Tom is a very likeable and engaging comic and he was definitely at the top of his game tonight. Some of the material was familiar and parts of them had been used on BBC’s Live at the Apollo the various comedy panel shows. I would imagine this is the bitter-sweet of modern comedy, it’s great that he is gaining more TV exposure and fame, but it means that his material has a short life. Having said this, the shorter pieces that had been seen on TV were extended and reframed, bringing a freshness and sometimes different and unexpected pay-offs. I have always loved his stories about his mum’s friend Joyce!

His whole performance was perfectly timed, with a consistency of delivery that made the time whizz by. Tom is a comedian who knows, and in fact delights, in word play and his show is extremely well-crafted. I personally feel it’s time for him to have his own tour, maybe with friends in support, and in bigger venues.