Morgan and West - The Lowry

Tonight's performance was everything I expected and more! This duo of comic magicians certainly fulfilled their promise of a fun night for all ages with their combination of magic and comedy really working a treat.

Rhys Morgan and Robert West make up their perfect act with sure huge personalities and confidence making the audience in awe of them from the start. Dressed in Victorian attire and performing their routines consisting of time travel and traditional illusions there wasn't a dull moment. The younger members of the audience certainly enjoyed the humour and wit so it's a shame more didn't attend. I think with this tour an earlier start time should be applicable so more of a varied audience can enjoy this masterpiece.

The pair have really developed their characters on stage and it's clear to me when researching that their alter-ego is very believable. They have created backgrounds for their characters and stories for themselves which clearly helps them to step straight into performance mode and impress their audience every time. It's also clear that they enjoy working together, the pair first meeting at Oxford University and kick starting their careers from there has definitely given them a solid relationship in their working years which is lovely and works.

Their routine is very unique and clever, one of my favourite tricks they performed was their take on balloon modelling which is safe to say got their younger audience members on side. We also saw Morgan destroying West's attempt at teleporting which added great comedy value.

The rivalry between the two, you'd presume would lack connection and co-operation on stage but this just adds to the suspense and final climax after part of the routine.

The interaction between these two maintains a solid pace throughout the show meaning there isn't a dull moment on stage. This is a very cleverly constructed show and great fun for all the family. Chaos, humour and unique tricks already to a fantastic night of entertainment.

For more information and for future dates in this tour visit www.morganandwest.co.uk you won't want to miss this! 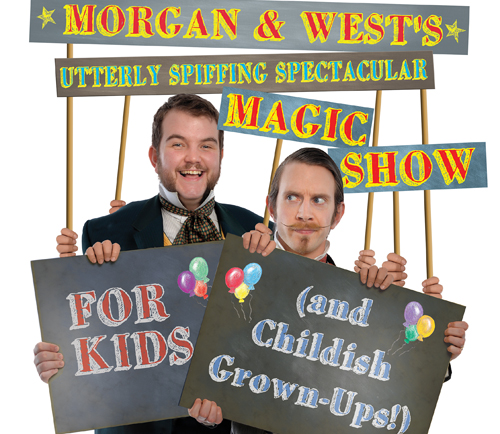