The Noise Next Door is a live comedy quartet made up of Charlie Granville, Matt Grant, Tom Livingstone and Sam Pacelli. Having met at university, and having been performing together ever since, they are masters of their art - comedic improvisation.

The basis of their shows sees them taking suggestions from the audience for each sketch/game and creating scenes and songs accordingly. Think of a modern-day version of ‘whose line is it anyway’ and you’ve pretty much got it.

Each member of this ensemble is so quick witted, and fast thinking that you’re left feeling flabbergasted at times, as to how they manage to deliver with such ease and humour.

They started the evening off with a song. They took ideas shouted out from the audience to produce a random storyline, and then proceeded to deliver it off the cuff, to a backing track. This warmed the audience up well, and we all settled in to what promised to be an evening of laughter. 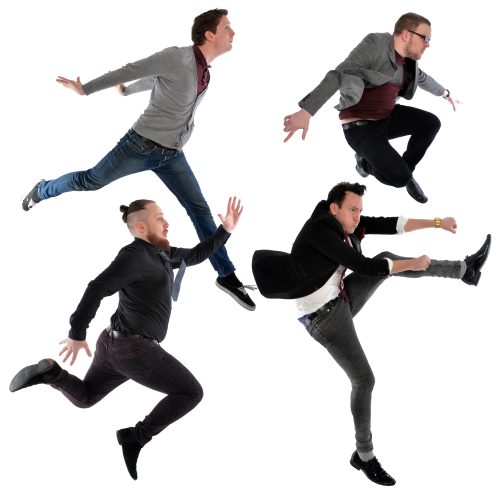 One of their sketches involved a member of the audience volunteering up their phone to be used in a scene. Granville would use the phone in a given situation (this time at a girly sleepover, Ann Summers party) and he could only ever speak in the scene by reading a message off the phone. It was a clever technique and highly entertaining for the audience, especially the friends of the volunteer.

Another sketch saw a different volunteer go up on to the stage to become the ‘sound effect guy’. He was given access to the iPad of sound effects and he was to press different options throughout an audience suggested scene. I seem to remember this particular scene, played out by Pacelli and Grant (which ended up seeing a single dad, who’d gone to pizza hut with his child, turning out to be Papa John secretly sussing out his nemesis) probably got the most laughs of the evening, and I personally had tears at this point from the ‘belly laugh’ I was experiencing.

The audience went into the interval in high spirits and everyone was eager to see what they had to offer in the second half. Unfortunately, this is where the lull of the evening came.

The first sketch of the second half saw Pacelli taking suggestions from the audience for the other three to come up with jokes on. I just don’t think it worked. Judging by the atmosphere amongst the audience I think this was the general consensus, and it was a shame as everything else in the show was spot on. I think they need to replace that section, or even as a last resort make the show shorter without it.

Having said that, the rest of the second half was highly entertaining. More sketches, more audience participation, including people going up on stage, and ending in a final song about two singletons in the audience.

Having seen The Noise Next Door before, I was eager to see them again. They once again made for a uniquely funny evening, and overall did not disappoint. I would certainly recommend their show and feel even slightly jealous of those who haven’t seen them yet, as the first time watching them is certainly the best.