Now, I saw Hal Cruttenden in September and really enjoyed him, so I put myself forward for this show: same venue, same day of the week, hoping it’s not the same show. (It isn’t. Although if it was that’d actually be fine, because he was great back then.) It’s a Sunday again and sadly the house isn’t packed, but Manchester and Salford you’re missing a treat, because Hal Cruttenden is on fire.

He strolls out to very impressive applause. He tells us he’s angry, he’s into Gangsta Rap and he’s Middle Class. Not all these things generally go together. I didn’t pick up last time about his anger, but he slams it home this time; he’s angry on stage because he supresses his anger in real life behind manners and etiquette. Hal’s delivery flashes schizophrenically between this indignant anger and camp hilarity. He talks a bit about his parents and childhood: “I had no brothers to beat me up… Just sisters to dress me up.” And the tales about his Irish wife and two teenage daughters (who call his “Chubster”) are very funny: “I never really think of you as a parent… I leave that to mummy.”

Best of all though, is when Hal is interacting with the audience, coming out with spontaneous comments and really making himself double up with laughter, which is contagious. He held the stage for ninety minutes and made it all look effortless. He’s self-effacing, always ready to have a pop at himself, while also – by his own admission – being shallow, self-indulgent and limelight-seeking. His politics come with provisos: he’s very Left wing… unless it affects local house prices, and will be more Left wing when his daughters have graduated from the education system; all delivered with a rye smile.

There isn’t a line in this show that doesn’t work… but even if it didn’t Hal’s delivery would make it funny; he’s such a natural showman and storyteller that he really deserves to be much bigger than he is. 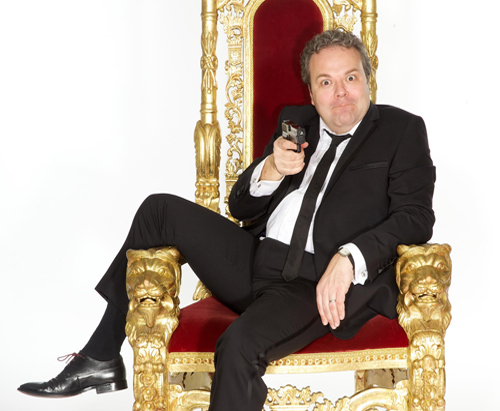