Despite working the circuit that I know so well for many years, and appearing on all the right TV panel shows, Tony Law has somehow slipped my comedy radar. In hindsight this may be my own brain blocking him from memory due to sheer confusion. Canadian Law has won several comedy awards, and done the rounds of Have I Got News For You, 8 Out Of 10 Cats, Russell Howard's Good News and the like, but having very little previous experience of him I entered The Lowry with no expectations.

I will start by saying that the Quays Theatre is just not pleasant. That lingering bad smell and rows of chairs that move with the slightest tap of a foot from three rows away does nothing to put me in the mood for comedy. Looking around the audience I can see many confused and lost faces like my own, but also many super fans who are crying with laughter, encouraging their unsuspecting partners and friends that they have brought along to the show. 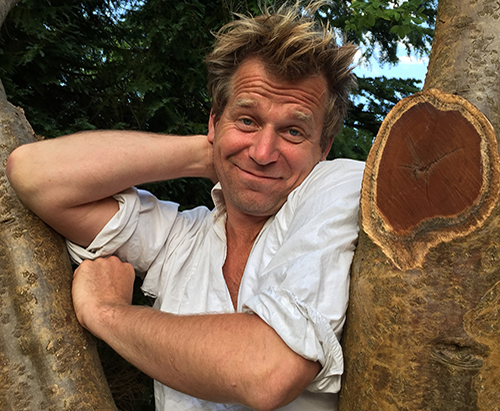 Law is hard to describe. Perhaps he says it best himself; not exactly stand-up or theatre, just “other”. His surreal and absurd comedy seem to swing out of nowhere, and it's hard to tell just how much is rehearsed material and how much just pops into his head! Right from his entrance in a cape, headband, and Mickey Mouse gloves (which are never explained), we are preparing ourselves for a fascinating insight into a mixed up mind.

He meanders between a vast variety of topics including Somali pirates, war bombings and severed heads. During his too-long section wearing a horse mask and badly playing a trombone, he has lost the majority of the audience. However it is his moments of observational comedy that really land well. Although still in his inimitable style, he gives us something to relate to and has us all on side. In fact, the whole second half of the show was fantastic, his tales of sausage dogs and his dangerous Citroen Xsara Picasso being something we could all just about get our heads around.

My favourite sections of the show were the parts of the routine created simply to show off an accent. From a well-appreciated Yorkshire voice, a Southern twang and an African attempt, he definitely had this comedy accent lover rolling in the aisles. In fact I was almost disappointed that my native Scots was not on his list. Maybe next time.

Law is certainly not everyone's cup of tea, and definitely not what you would expect from your standard comedian. Those of us who managed to just about piece it all together and follow his warped mind may well be leaving The Lowry as new fans. As for me, I'm not too sure yet.