Knowing what to believe and distinguishing fact from fiction is at the heart of these Arthur Miller plays, which explores aspects of his marriage to Marilyn Monroe – yet is very apt for the times we are now living in.

The two plays both focus on two people with two very different views of the same reality. The first short act ‘Elegy For A Lady’ is set in a 1950s collectable shop in New York. The Man is looking for a gift for his dying mistress, the proprietress a sounding board, that questions what are the real facts and what is pseudo-evidence to support the hypothesis in his head.

The man describes himself as much older than the woman, however the casting of the young, handsome Philip Cairns in the role is a little unsettling – as is the veneer of honesty in this tale. The 30 minutes of drama gives you little time to get under the skin of the two characters before the lights rise and it’s time for an early interval. This disruption of the audience plays to the unsettling narrative of the play, which has led us into almost a pastiche of a Miller classic. 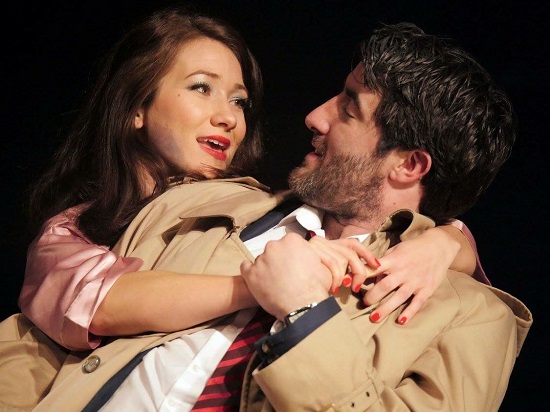 However, I feel this then sets the scene to hit the audience hard with the second part of the evening ‘Some Kind of Love Story’ which throws us headlong into a five-year relationship between a former police officer and private investigator, Tom and a prostitute, Angela with multiple personalities and the key to a miscarriage of justice. I feel played by the players – and I like it.

The sexually abused little girl, violent predator and haughty madam locked inside the head of Angela are realistically brought into the room by an actress new to Theatre by the Lake, Sarah Ovens. Her performance is stunning, and frightening as the woman with multiple personalities. From reading biographies of Miller’s ex-wife Monroe, you can see how he drew upon her fragile nature and mental health issues to illustrate the difficulties he faced living with a woman so broken by her own history.

While Cairns looked too young for the role of The Man in the first part of the evening, his stage persona rapidly increased decades before our eyes as Tom. His frustration shone through - not being able to dissect the fantasy world of someone experiencing a psychotic episode from the horrendous facts she knew and which haunted her ever moment.

The choice of a traditional theatre style rather than an in the round layout for the set was brilliant. Like Tom you could only see the actions of the woman in front of you, there were no clues on the faces of others in the audience to the reaction of that behaviour. The closeness of the audience to the set was claustrophobic with the power of Ovens’ performance. You could feel how stifling and difficult it would be to be in such a demanding relationship, with someone who could be a whole new, yet equally challenging personality within a split second.

The black and white street scene set made the studio feel like 1950s New York – a place of opportunity for a young Irish immigrant and, also a city of fraud, corruption and an atmosphere of not knowing who to trust. It beatifully created two rooms where two people were looking for the evidence to back up their own version of the truth.

A great play to kick start the new season at Theatre by the Lake, and a late classic piece from Miller that’s well worth seeing.