Dear Uncle - Theatre by the Lake

One of England's most prolific and well-loved play writers, Sir Alan Ayckbourn has adapted Chekhov's Russian based Uncle Vanya and brought it literally to Cumbria, writes Karen Morley-Chesworth.

First presented at Ayckbourn's Stephen Joseph Theatre in Scarborough in 2011, this new version is set in the beautiful, wild countryside which surrounds Keswick, so Theatre by the Lake seems an apt place for this production on the shores of Derwentwater. 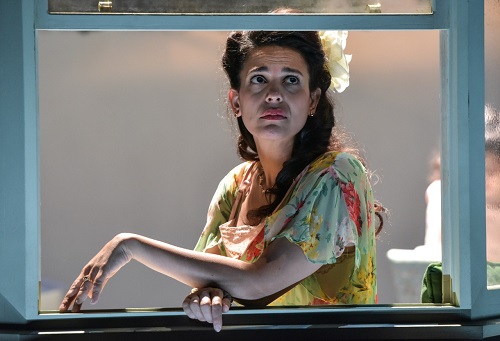 The existing family members in the house; his daughter from his first marriage Sonya played by Joëlle Brabban, Veronica his first mother-in-law played by Maggie O'Brian, Marcus her son played by Dominic Gately and Maria the Nanny played by Rachel Laurence all have their peaceful rural lives turned upside-down to meet the demands of the Sir Cedric.

The addition of the local doctor Charles Ash, played by Chris Porter and the retired teacher Julian Touchweston-Smith played by Eric Potts creates further relationship tensions as; the doctor loves the new wife, the new wife (possibly) loves the doctor but remains faithful to her older husband, while her husband's brother-in-law is infatuated by her and the teenage step-daughter has a crush on the doctor. Sounds like a fun farce waiting to explode onto the stage.

Ayckbourn's comedies are popular, with their themes of marriage and middle-class relationships, filling theatres here and on Broadway. The combination of Ayckbourn and Chekhov raised expectations of laughter.

The choreography which was used to change the settings within the country house added to the production, and the music provided the perfect atmosphere for the time and place.

Chekhov himself described this play as 'scenes from country life' and it feels like snapshots from a summer. There are themes within the play set in the 1930s, which are possibly more relevant today than when they were first written - the impacts of deforestation on the world which is the passion of Dr Ash, work-life-balance and the impact of ageing on the individual and those around them.

The romantic infatuation, suffocating desire and motivation for more altruistic passions comes through Dr Ash's character. Porter's characterisation of this role shines out through his performance. As he becomes more besotted by Helena, his desire to help save the forests diminishes - yet in his darkest moments, he returns to the one true love he can rely upon, his trees.

Gately's portrayal as Sonya's much loved Uncle Marcus is beautiful, sensitive and moving.

Due to illness Georgina Ambrey who we saw give an excellent performance in Little Voices was unable to play Sonya on the evening we attended however, Brabban, who has taken over the role for the remainder of the season gave a great performance as the love lost yet a studious teenager.

Maggie O'Brian's performances as the matriarch, under the spell of her son-in-law (whose every word she hands upon due to his academic credentials), is superb. Her haughtiness brings as much amusement to the performance as the words.

Potts has so little to work with as the retired teacher in this play, and it is such a shame, as he is a brilliant presence on stage. He works wonders with the role and brings real pathos to the piece with his revelations of his own romantic past.

This is a gentle walk through one summer with one dysfunctional family and their friends, brought under one roof in the rural idyll that is the Lake District.

'Dear Uncle' runs at Theatre by the Lake's Main House until 2nd November. To find out more call the Box Office on 017687 74411 or visit www.theatrebythelake.com