A Christmas Carol - Theatre By The Lake, Keswick

You know Christmas has really started when you see your first performance of Charles Dickens' A Christmas Carol - however, this year's production at Theatre by the Lake gives a completely new approach to the tale that kicked off Christmas as we know it today.

There's still the ghosts of Christmas Past, Present and Future. There's still the Dickensian scenes, with plenty of snow! Yet this very witty and beautiful adaptation by Patrick Barlow is also perfect for these times in which we live.

The set is stunning - simple, contemporary and effective. As Big Ben stands proud, centre stage the workhouse, factories, shops and homes of Victorian London are set before you. 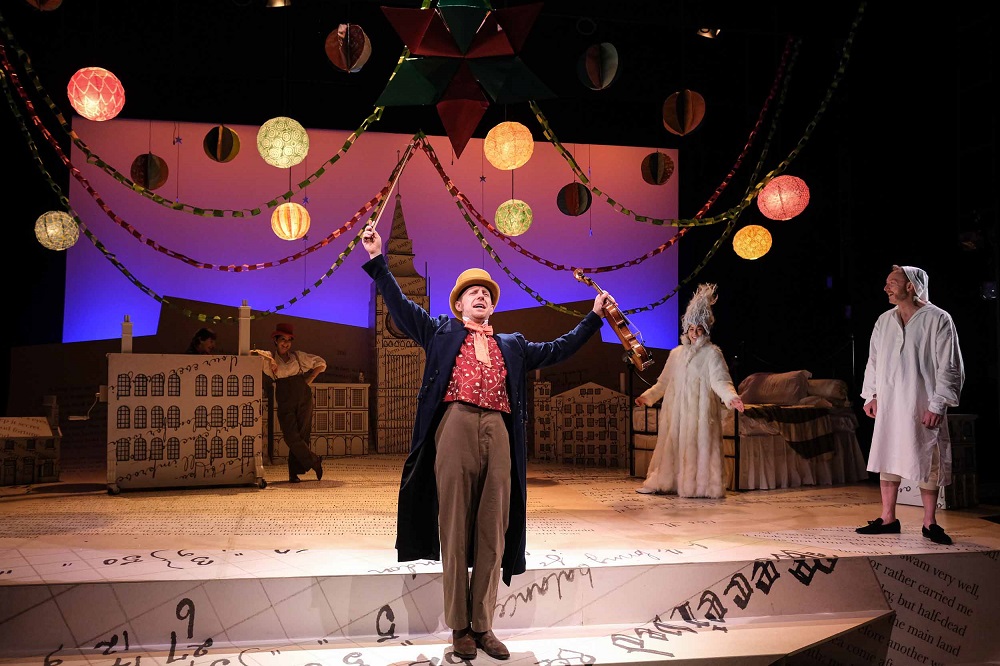 With every poor customer of the loan shark Scrooge who walks into his money house, another fluttering of snow descends, as the cold heart of the marketing mogul uses the goodwill of the people at this festive time to make a huge profit at their expense. Sound familiar? Could Wonga loan company have returned?

Darren Lawrence gives a new approach to the role of Scrooge, and it works so well. He seems more real, more relatable, and more entertaining. This is a really fun production which keeps the Christmas story's spirit alive and even more relevant.

This cast of six are so versatile - musicians, dancers, singers and multiple part players. They are even puppeteers to create Tiny Tim and his siblings in the most amusing manner. Matt Hutchinson as the Puppetry Director and Designer deserves a mention, as there are some brilliant performances using objects to create characters.

It was good to see Sally Cheng return to Theatre by the Lake, following on from her performance in The Emperor and the Nightingale. Cheng is so multi-talented. Her singing and musicianship stand out, as does her performances as Lavinia Bentham, Isabella, Mrs Cratchit and Constance. Her scenes with the young Scrooge, played by Max Gallagher are moving, and the dancing charming. She has an amazing stage presence and moved smoothly between her roles.

Claire Storey as the Ghost of Christmas Present is hilarious, and nothing like any other performance I have seen of A Christmas Carol ghost. She is larger than life, with an enthusiasm that literally lights the stage up.

Gallagher's presentation of Tiny Tim is excellent. To tell more would spoil the illusion - pure theatrical genius which had the theatre filled with laughter. His role as the Ghost of Christmas Yet to Come was also a little different for the norm too.

To take a classic like A Christmas Carol and decide to deconstruct it is a very brave thing to do, however, Barlow has put the pieces of this favourite Christmas tale back together again in a way that keeps all ages happy.

This is a festive production that will amuse, entertain and rekindle the spirit of Christmas in the hearts of the children and adults who are lucky enough to see this production.

A Christmas Carol runs at Theatre by the Lake, Keswick until 11th January 2020. https://www.theatrebythelake.com/production/18395/A-Christmas-Carol