She is a household name who revolutionised the way middle class women managed their homes, yet the truth of Mrs Beeton’s own domestic setting were far from perfect, as Alison Neil brings to life onstage in her own one-woman show, writes Karen Morley-Chesworth.

On a cold, wet, windy night in a village hall in the middle of Cumbria’s Eden Valley, ‘Mrs Beeton, My Sister’ attracted an almost full house, as it visited as part of the Highlights Rural Touring Scheme.

Neil has not only researched and written this one-hour play, she has also handmade the costumes and created a set which takes you into the private parlour of the sister who tells the story of Isabella Beeton with pride and sadness.

The true-life story of Mr Beeton rivals the fictional tales of Dickens. From the very start of her short life, there was loss, responsibility and sadness. 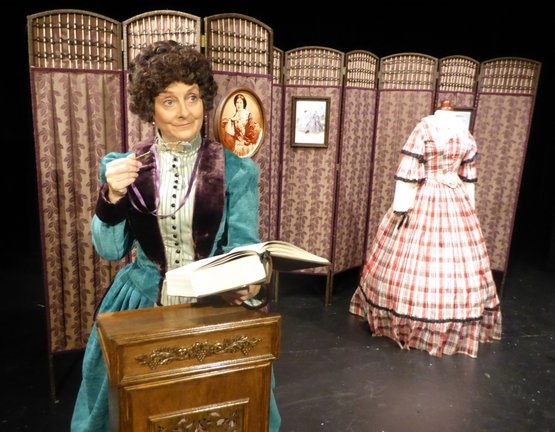 Her introduction to Sam Beeton, printer and publisher, womaniser and financially incompetent businessman failed to improve her prospects. He went before the courts on a number of occasions due to contractual disagreements, was far from her saviour - though he did provide her with the platform to speak to women across the British Empire.

This production highlights how many merchant’s wives and respectable women in Victorian times worked hard in their husband’s businesses - and her family story has the rags-to-riches and riches -to-rags themes as well. This is an emotionally rich story which Neil handles beautifully.

As the sister, she brings the members of her family to the stage with great character acting, and fills the room with the voices of the past.

Neil is a wonderful performer, and in character greeted the audience to the performance. As she begins her tale, she lays out the layers of life experience which were used by Isabella to build and to create Mrs Beeton.

With extracts read from the original ‘Beeton’s Book of Household Management’ as part of the performance, the public image of this woman clashes with the sadness of her private life.

However, this is a very funny and entertaining performance, as well as informative.

Director David Collison, who has directed Neil’s last five one-woman plays, has kept the production tight and at the perfect pace.

As Neil hangs the family pictures upon the wall and she unfolds Isabella’s dress, you can feel a sister’s passion, love and longing for the sibling she lost. And it is this passion for historical research that shines through from the words and the performance by Neil.

A professional actress for over 30 years, Neil has written many historical plays for stage, TV and radio. Her attention to detail in her writing and performance makes this produce not only entertaining but provides an insight into the lives of Victorian women.

From laughter to sadness, Neil takes her audience on the journey through her family’s history and after the performance joined them to discuss every aspect of the production - including how the costumes were made and how she researched this play.

Mrs Beeton, My Sister is on tour visiting: