Mention the words “crooner”, “big band” and “swing music” and I’m there! So tonight, I was there....at the beautiful Buxton Opera House to watch “Crooners”. I wasn’t quite sure what to expect from the show as it didn’t seem to be the average Rat Pack tribute according to the promotional material

– in fact the leaflet and poster put me in mind of Sherlock Holmes rather than crooning, as the three stars are pictured with very British looking accessories such as pipes, bowler hats and tea cups...

This show is very different to any Rat Pack tribute that I’ve ever seen. It has a very large element of comedy which is extremely funny but sometimes misplaced. What is crystal clear, however, is that the three performers: Roman Marek, Jim Whitley and Philip Barley (respectively named as Francis, Samuel Davis and Dr Martin on the website – but referred to as Charlie, Winston and Rupert in the show) are top grade singers and performers, all having appeared in The Rat Pack touring show. I was particularly impressed by Philip Barley when he performed as Dean Martin in the second half, he was so convincing in every way. 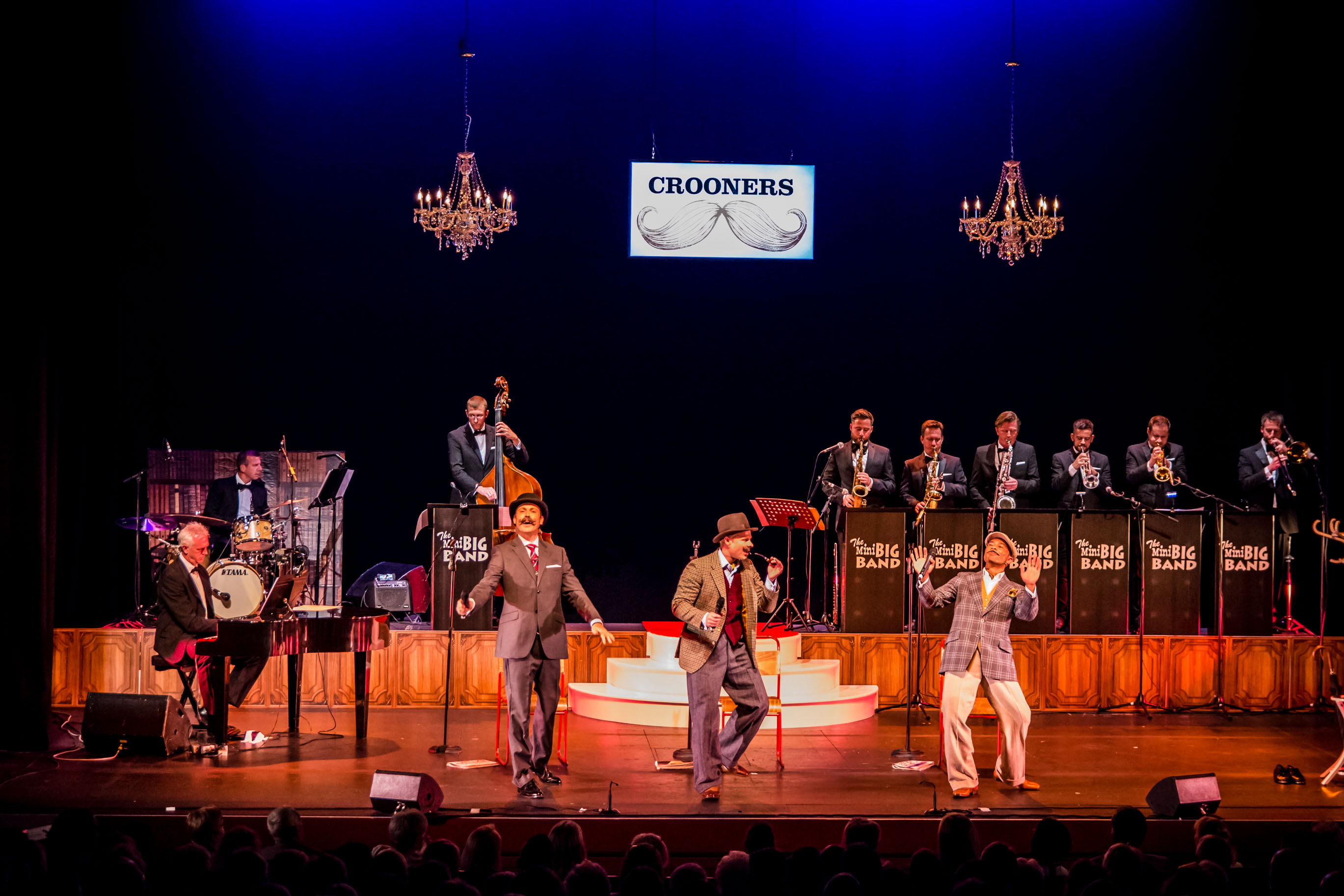 The premise of the show is that the Crooner is a dying breed and the purpose of them being here tonight is to breed more Crooners...they even have a ‘breed list’ from which they read out the names of ‘eligible fillies’ who are in the audience. It’s a bit weird. It also goes on a little too long – the joke has been made (and I’m sorry chaps, but it’s a bit weak) and then it just keeps being made...again and again.

There is plenty of (sometimes rather risqué) banter with the audience and this is very funny – Roman Marek is King of the one liner and has perfect comic delivery and timing. Unfortunately, sometimes it did descend too much into Norman Wisdom style slapstick and I was put in mind of a child who was showing off for attention, which is a pity because it dilutes the brilliance of the rest of the show.

Banter with the audience and between the performers is very necessary for this type of act and all three are fabulous at this, delivering spontaneous responses which were witty and quick. There was also quite a lot of corpsing which completely won the audience over and which everyone loved, including those on stage! I laughed hysterically watching the performers laughing so much so that they had to hold their moustaches on, it was really funny and so entertaining. I think there was quite a bit of ad libbing which was hilarious and well judged.

‘Crooners’ has elements of song and dance, comedy and physical comedy as well as putting me in mind of The Full Monty/male burlesque/stand-up comedy. The choreography is very well done and really enhances the act. We even have some rather splendid tap dancing and soft shoe shuffling. Each part was skilfully executed and that is not in question. The problem for me is that it’s not all a good mix when put together.

The show is a mish mash of comedy and wonderful singing with fantastic accompaniment from ‘The Mini Big Band’, loosely held together by the breeding storyline which I just didn’t think was necessary and detracted somewhat from the outstanding talent that was before us on the stage. I also felt that some parts were overly long and needed tightening up as it seemed that they were just killing time on the stage on more than one occasion.

To summarise: the show has outstanding singing and performing; whilst at the same time being quirky and weird with a large helping of British eccentricity thrown in but my overall feeling is that it needs more croon and less buffoon.