The Horne Section are a five-piece band with Alex Horne acting as host and vocalist, knitting the show together. The band consists of Ben Reynolds (drums), Joe Auckland (trumpet and banjo), Mark Brown (Saxophone and guitar), Will Collier (Bass and guitar) and Ed Sheldrake (Piano). They have been playing together since 2010.

It is my first foray into the world of ‘Horne’ so I thought I would have a poke around their repertoire to find out what to expect. Edinburgh Fringe has been their playground for several years with their wacky style of adventurous playfulness obviously suiting the Edinburgh audiences as many of their shows were sell-outs. They have also been regulars in the West End, BBC Radio 4 and Alex Horne created and co-hosted his very successful ‘Taskmaster’ which has won awards. 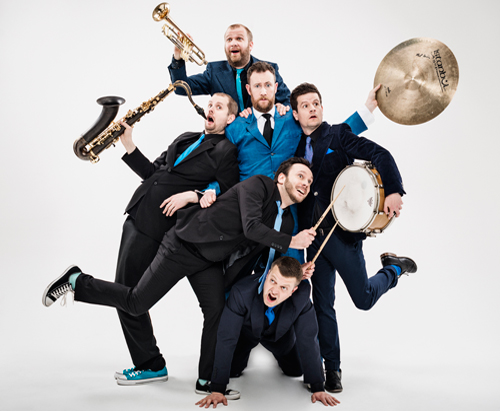 The evening begins with a sound check with a difference and ends with Alex Horne being carried onto the stage by volunteers. This sets the tone for the evening and nothing is going to be done in a conventional way! It soon became apparent that involving the audience is key to their act, so be prepared to join in if asked. (I would recommend booking a seat in the stalls if possible as you will feel more connected with the show than being in the circle). The participation of John and Gail in the boxes, Anthony who sang an adapted version of Happy Birthday (as it was his birthday) and the guys who had to do a ‘Generation Game’ style loo roll game, all helped to reel us into their off the wall show.

The gang clearly love doing this show and the skilful way they weave the musically talented band members into the comedy but make it look so effortless is ingenious.

This is a fast-paced show and takes some energy to keep it going, I can only imagine the amount of rehearsal that has to take place to get this to work – and to look so relaxed.

It is good to see that the whole show is not pre-scripted as when involving the audience, it certainly helps to add impromptu pieces to keep the audience connected. Personally, I have a passion for improv, so this satisfies my love of natural comic timing which Alex Horne obviously has.

By the end of the evening, we have been treated to their own version of a cabaret show with such a mixture of idiotic songs, games, sketches and dancing. I love how the show is personalized for each audience and venue which will always go down well. The stage ends the evening looking like how I imagine Glastonbury must look when the revellers depart, but they have come armed with a big brush so that’s ok then!

The Horne Section invite you to join in their weird world of ‘Horne’ and it would be rude not to – wouldn’t it!

The Horne Section tour is at multiple venues throughout the year. Go to https://thehornesection.com/shows/ for booking details.