Rumpus Theatre Company have adapted a short story (The Black Veil), originally written by Charles Dickens in 1836 for various periodicals, that was republished as ‘Sketches by Boz’. He was only 24 at the time of publication and although not his most famous work, he gave us a glimpse of his writing abilities.

In line with many Charles Dickens stories, this is a dark play, and the staging reflects that. With the use of black material, and subdued lighting, an eerie, creepy stage greets us, when the curtain is raised.   Dr Ruggles (Christopher Brookes), (a medical doctor newly qualified), sits in his rocking chair, sleeping, when he is disturbed by a knock at the door. An unusual lady enters the room and her features are indistinguishable as her head is completely covered by a black veil. She introduces herself as Ada Crawlings (Dorkas Ashar). 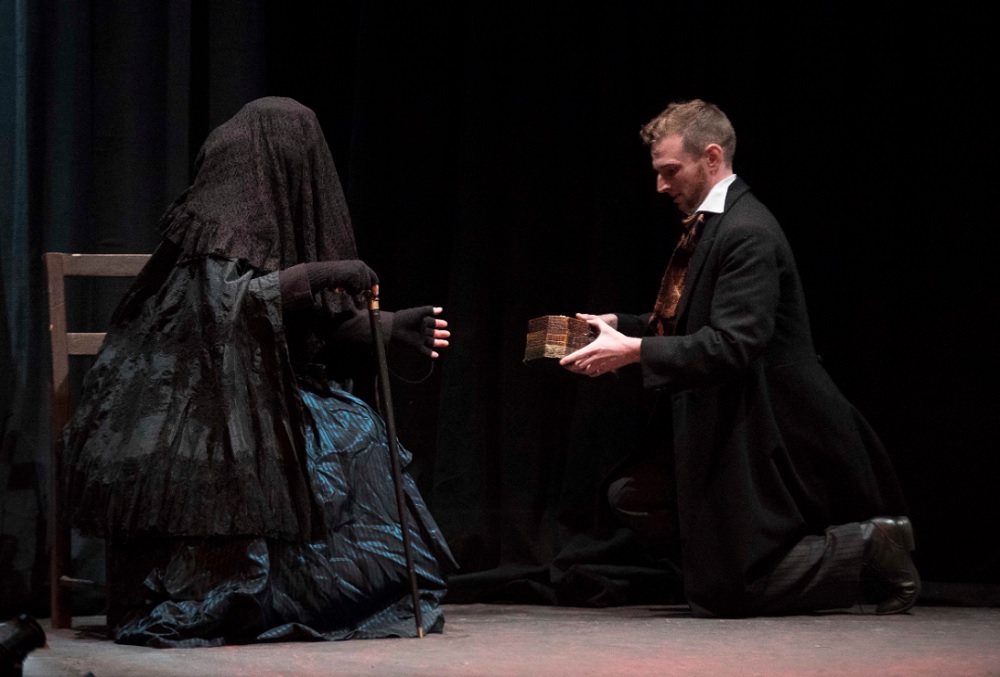 What on earth can an old lady be doing walking around on such an awful night as this? On whose behalf has the lady come to ask for help? Why isn’t the Doctor able to treat this patient tonight and instead wait until morning?

Charles Dickens tends to weave tales of ‘hard times’ into his stories, and there is no shortage here. His short story creates subtext, which is captured well in this play and is easily recognisable as the work of Dickens for his fans. The characters have been tweaked from the original story to help with the dramatic tension, but the story itself has had a lot added to it to make it into a full play rather than one act. There are times when I am not sure that this was for the better. There was a major addition of back story for Dr Ruggles and two new characters added, but this deviates from the simplicity of the original short story. The intermission came part way through a scene, which gave a feeling of an unfinished chapter in a book.

The fantastic groundwork that had been put into place in the first half, began to unravel a little in the second half. The delivery of lines felt too hysterical as the tension increased, and some of the suspense was lost due to this.

Even considering my comments above, this is a good production and for those who prefer a more classical play, this will certainly appeal. The lighting design (Keith Tuttle), provides an eerie ambience and the sound designer (David Gilbrook), has gone a long way to transport us back to the early 19th century. The versatility of the set works well, and minor set changes are accomplished quickly.

If you enjoy Charles Dickens and early 19th century plays, then this will be right up your street!

The play runs until Saturday 14th March 2020. To book go to https://buxtonoperahouse.org.uk/event/the-black-veil