‘Why is it easier to imagine the end of the world, than it is for us to imagine it to change?’

It’s quite incredible what the team at Joan Cleville Dance manage to fit into an hour of physical theatre. Joan Ceville (Choreographer, Dancer/Actor, Writer and Director) does very well to make the language and movement of his piece show the social, environmental and political landscape of today. Despite having little in the way of clear linear narrative, this piece provides the audience with fundamental questions about our existence in this world. Our constant struggle, both in dark and through light, for ‘Utopia’. 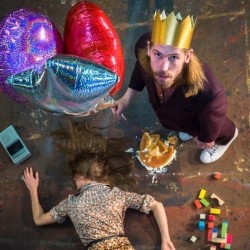 We are invited into a world of stories, pastiches, Buffon style comedy and incredible choreographed physical theatre and dance. This episodic structure is integrated with song, dialogue, movement and clever use of the minimal set. Sometimes beautifully interwoven and at other points a little hap-hazardily so.

In the role of Dramaturgy adviser was Ella Hickson. The fluidity and duality of the language was something that particularly shone throughout this production, providing many memorable moments, giving a relatable background and language for the audience whilst providing the actors to further explore, through movement, the surreal nature of the situations created.

The two actors and dancers, Solene Weinachter and Joan Cleville, had a chemistry that never faltered. They were lovers, babies, fun fuelled club dancers and they invited the audience into their world and held our hands along the way. We sang ‘Imagine’ by John Lennon, we built bric-a-brac upon entry and we were sad to see them leave at the end. A particular mention should be made for Solene Weinachter, her ability and fluidity in movement and character was a real treat to watch. A favourite story of mine was her rendition of the ‘Old Man and the Magic Tree’ story, Solene completely transformed her body in and out of herself with ease providing much entertainment for the audience.

The dancing was stylish, the acting honest, the story thought provoking. There were some moments that did linger longer than necessary and others that didn’t quite work or fit, but overall this is a show well worth catching.

Playing at Pleasance Two 10.30am – 11.30am until the 26th of August. https://tickets.edfringe.com/whats-on/plan-b-for-utopia