A Womb of One's Own - Pleasance Dome

London-based theatre company Wonderbox bring an energetic, neatly choreographed discussion about sexuality and abortion, highlighting the importance of human connection and emotional support through the beautifully heartbreaking story of Babygirl.

Danica Corns, Carla Garratt, Larissa Pinkham and writer Claire Rammelkamp come together as Babygirl on stage with a great vivaciousness and enthusiasm. The moderately complex choreography is a joy to watch and helps with following dialogue as each performer speaks for a different aspect of Babygirl’s personality. We learn about Babygirl’s Catholic upbringing which has led her to a life of constant guilt and restricted sexual encounters. 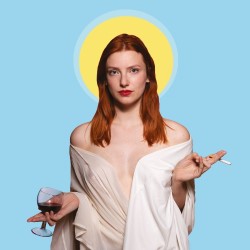 Babygirl’s real fun begins in university which is seamlessly brought to life by each of the actors. Although each of the women of stage play simultaneously play the same character and others, their skill in characterisation ensures that the plot is never difficult to follow. After a few one-night stands, Babygirl finds herself dating a woman from her university when she discovers she is pregnant. This is where the show takes a beautifully earnest tonal shift into the anxiety-inducing, guilt-ridden experience of organising an abortion alone.

Although there are still laughs where laughs are due, Rammelkamp’s script gives a great weight to the decision making process of a young single female. Loosely based on her own experiences, the script makes great political points about the contradiction between the legal state of abortion and its concurrent difficulty to access.

The real gem though is the exploration of human connection and emotion. As Babygirl makes her decision to terminate, she withdraws from both her university and her relationship. In what is one of her most difficult life experiences, Babygirl chooses to face it alone, carrying with her the Catholic guilt and the social stigma of having an abortion. The poignant point is raised: if 1 in 3 women have an abortion in their life, why does Babygirl feel so alone?

A Womb of One’s Own is a touching and heartfelt piece of theatre by a very promising young group of actors. Their clever use of humour and physicality is incredibly engaging and is an effective juxtaposition to the sincere moments. This is a skilfully crafted show which should be seen by young men and women to spark conversations and start breaking down the social stigma of sexual activity and abortions. Playing various sates until the 26th August https://tickets.edfringe.com/whats-on/womb-of-one-s-own